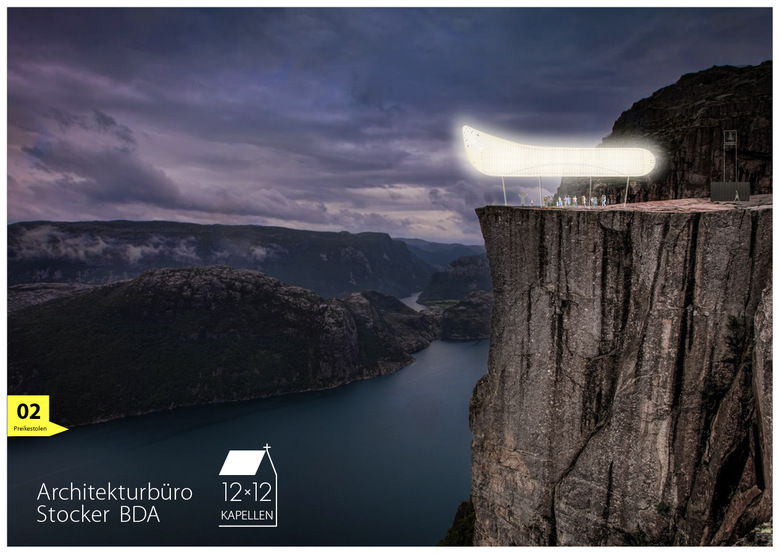 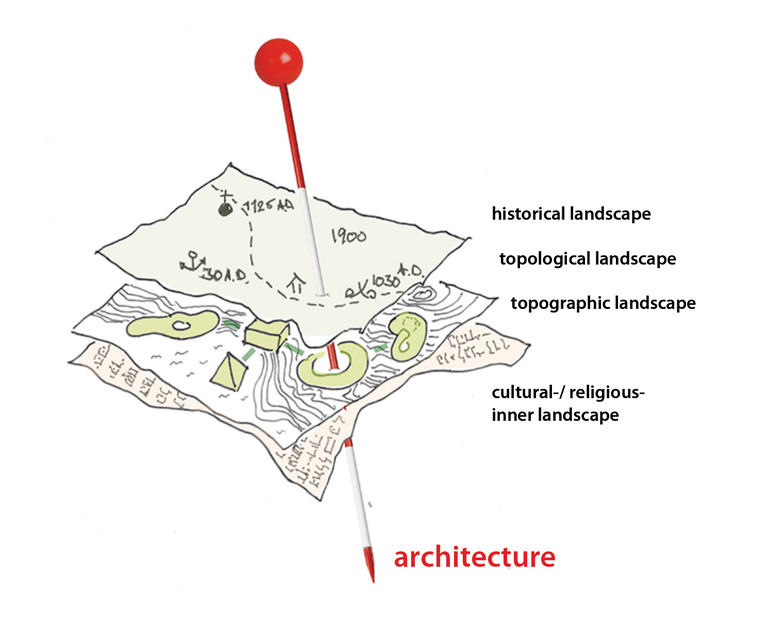 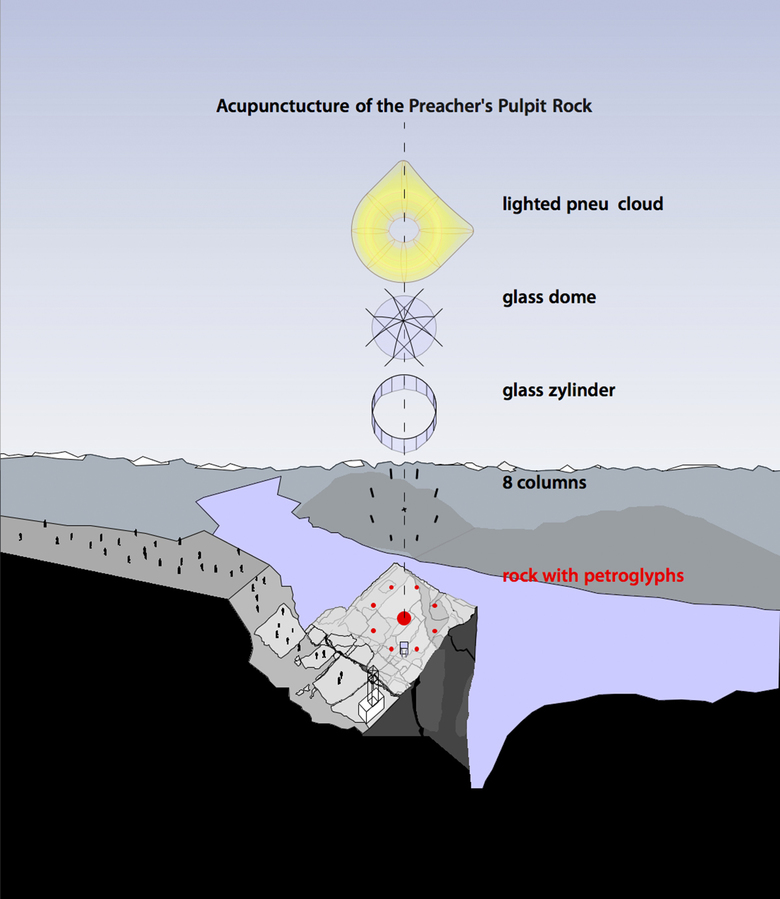 Every pilgrim to the rock leaves his / her prayers on the rock. The rock travels with the pilgrim, and changes the cultural landscape of Rogaland, Norway and beyond, as this competition prooves. The Pilgrimage to the rock is like walking on the palms of God's hand, leading to the sublime experience on the rock, which forms an open holding palm on which the pilgrim arrives exposed to the horizons.

“On the palm - under the wing - exposed to the sun, the weather, the seasons and change of light by night and day. “

This place does not ask for a building, but 200.000 pilgrims per annum change the rock. The temporary bulding will leave traces, these traces must be precise and thorough. They will remain as the petroglyphes of Bøla or Østfold as an accupuncture of the rock.
The lyrical consecration as petroglyphes is taken from psalm 139, vers 5 and 9. The apsis is formed be psalm 31 vers 9.

Context:
The pilgrims arrive in a parvis on the rock, with three sides: the back of the mountain, the bell tower and the chapel itself. Rock and mountain form an open angle to sky and horizons.

Construction:
The eight drilled holes will carry the light steel structure: A glass dome as skylight, bent glass walls barely touching the rock, a wing like “pneu” as an air-inflated envelope roof .
The other serving necessities are set by their weight on the surface of the rock without further deep drilling.

Hans van der Laan Quote
"Since the ground is too hard for our bare feet, we make sandals: for the sole of the sandal we use a material softer than the floor but harder than our feet. If the sandal soles were as hard as the floor or as soft as our feet they would be useless. But since they are just hard
enough not to wear out too fast, and yet still soft enough to be comfortable, they provide a harmonious interface between our soft feet and the rough ground."

Light: The skylight of the dome opens to the sky, the glass cylinder opens to the light of the horizons. The natural light is not blocked. At night the “pneu cloud” is lighted from within forming a halo.

In the centre of the rock the round petroglyphs are engraved:

"If I take the wings of the morning … thy right hand shall hold me …" psalm 139, vers 5 and 9
In the middle a way sign inspired by the St. Olavs Way is engraved, which could be used for the whole way. The shape of the cross is formed by the silhouette of Preikestool.

The apsis is formed to the east by an engraved inscription in the shape of a bow:
"thou hast set my feet in a large room" psalm 31 vers 9.

Eight drilled holes are exactly orientated to the four cardinal points and form thereby a gate to the east, south, west and north, following the path of the sun. The acupuncture of the rock fixes the layers topographic landscape, historic landscape, cultural landscape as well as the topological landscape and the religious/ psychological landscape. Architecture takes place and passes by.