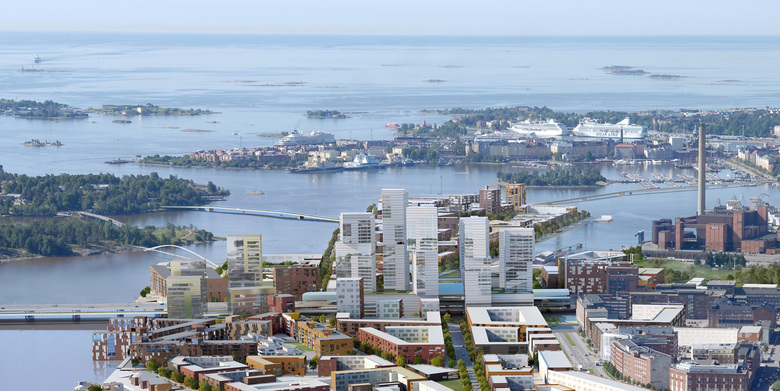 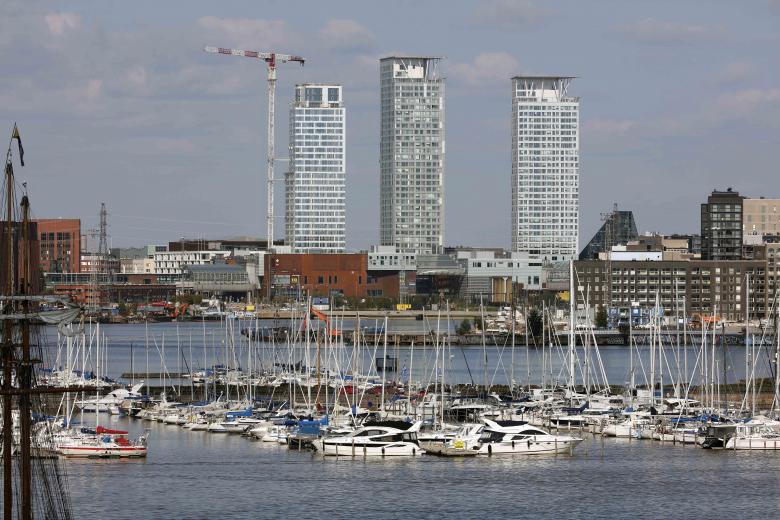 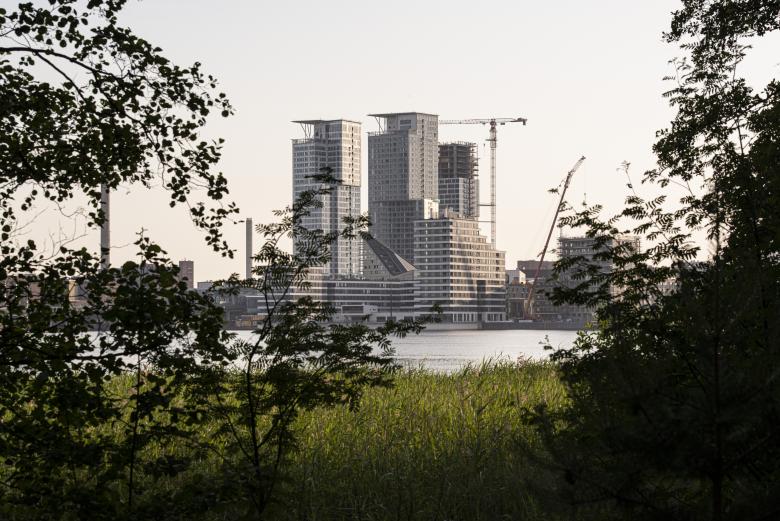 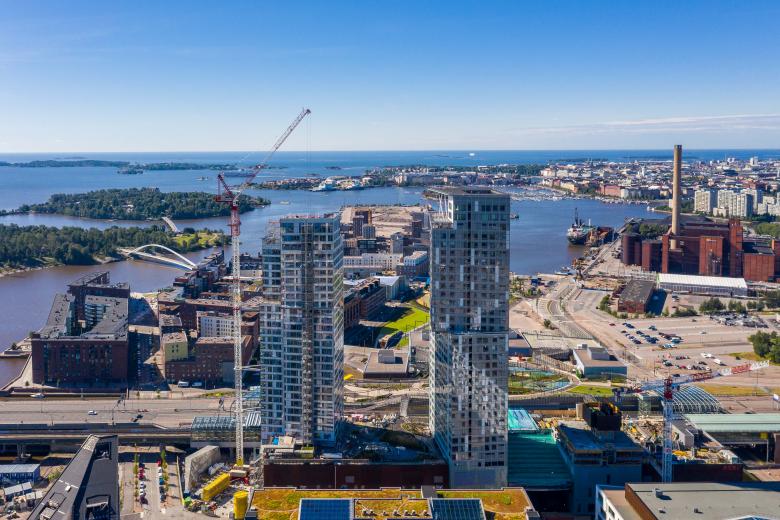 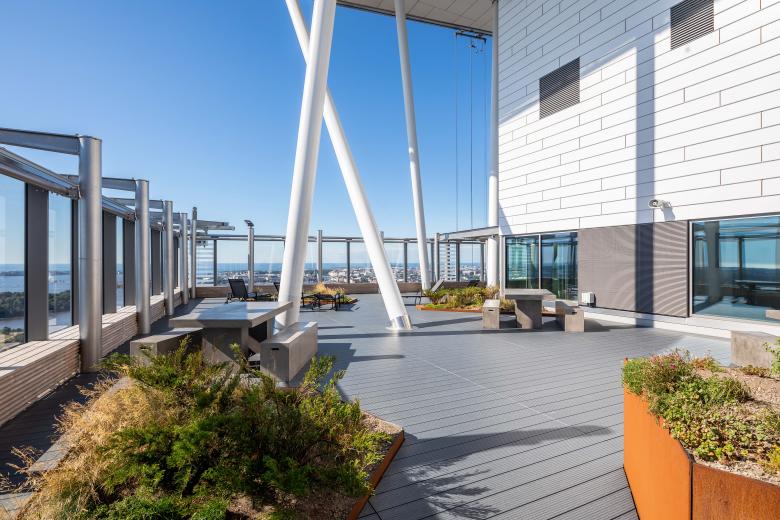 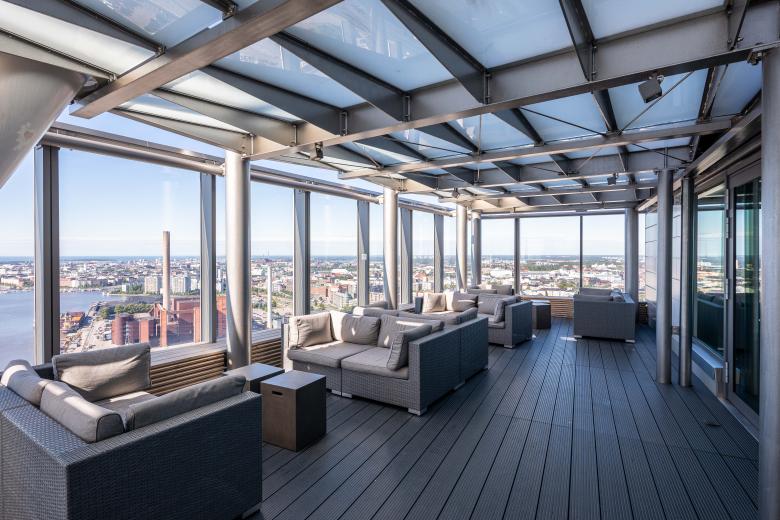 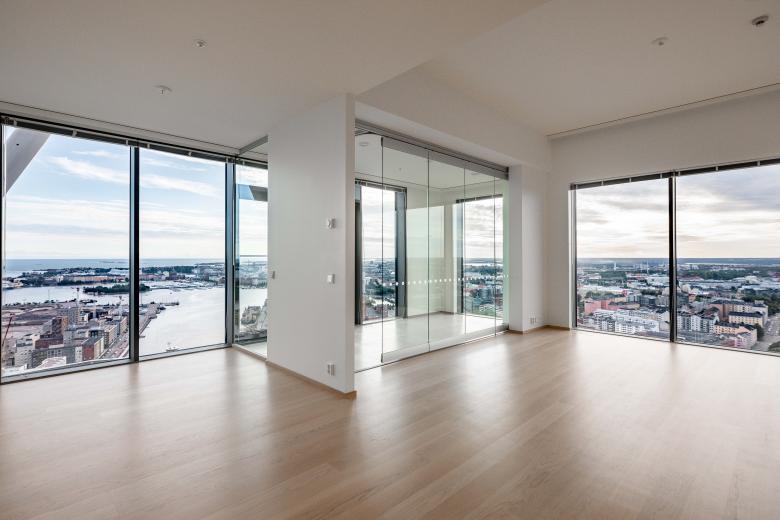 Instead of balconies, each flat has a winter garden, a warm round-the-year space separated by a sliding glass wall.
Photo © Visual Business Oy Matti Hämäläinen 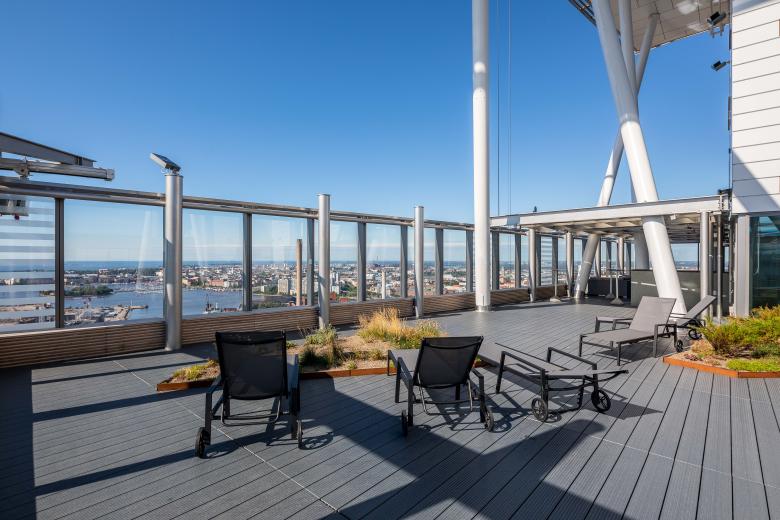 The design of REDI, the Kalasatama Centre, is based on the winning entry of a design-build competition organised in 2010. Once fully completed, the centre will comprise a service centre and a tower composition of eight high-rise buildings.

REDI shopping centre, that was opened in September 2018, is already a hub of traffic. The four-storey service centre is pierced by the metro and the six-lane eastward thoroughfare, Itäväylä. It is also accessible by tram, bus and bicycle. It provides parking racks for several thousand bicycles, and a cycleway running along Itäväylä connects the downtown cycleway network to eastern Helsinki. During construction, metro traffic was suspended for only a few days, when the metro bridge was jacked up to a new place because of the arrangements of quarrying 700,000 cubic metres of rock.

The first floor below ground houses supermarkets and a maintenance yard. Beneath these there is a two-storey parking facility and waste collection station for the whole district, and even deeper down, a parking garage in a cave. Besides shopping opportunities, REDI offers health, wellness and entertainment services. On top of the service centre and traffic routes, at the foot of the residential towers, there is a deck park Bryga open to all, which is connected to the Kalasatamanpuisto park, and courtyard decks for the use of the inhabitants. The Kalasatamankatu street, covered walkway on the ground level, divides the centre into two large city blocks, which are connected together by bridges on the upper floors.

In the future, the Kalasatama Centre will be the home of thousands of Helsinkians. The tower composition will be not only the highest in Finland but also a tower block ensemble of a kind that is rare in the world. To those who approach from the east, the towers will present themselves as the white gate of the capital of Finland. The residential towers will have 24–37 storeys and the highest one will rise up to 136 metres. The first tower to complete was the 35-storey-high Majakka ('Lighthouse') in 2019.The facades of the towers will be silk screen printed glass.

The roof terraces, meant to be used by the residents, will be connected to rentable party spaces and a sauna. The floors above the terrace level will contain large penthouse flats. The average number of flats per tower will be 250 and the total number in the whole centre 2,000. One of the towers will be a hybrid containing offices, an apartment hotel and a terrace restaurant.

The inhabitants’ shared deck courtyards will be connected to each other to enable moving between them, so children and adults can always find a varying place for play and leisure. The deck courtyards will also have access to the deck park and the Kalasatamanpuisto park. The deck park will be open to all from eight a.m. to eight p.m. The metro and the Itäväylä thoroughfare will be covered through the whole length of the centre for reasons of safety and noise and particle abatement. The design of a deck park the size of Helsinki’s Esplanade is creating high-quality, modern landscape architecture with rainwater motifs and compositions of archipelago plants.

Helin & Co Architects are also responsible for the interior appearance and shopfront design of the shopping mall as well as tenant adaptations and, for instance, the architectural design of the free-fall simulator, 7D cinema and climbing facility of the centre. Art will be present in the service centre, extending also to the lobbies of the residential towers, the artists including H. C. Berg, Marco Casagrande, EGS, Pentti Kukkonen, Inni Pärnänen, Silja Rantanen, Heini Riitahuhta, Tapio Rosenius/LDC and Maanlumo Landscape Architects with Huttunen–Lipasti–Pakkanen Architects.

A health and wellness centre commissioned by the City of Helsinki and designed by Helin & Co Architects has been built on a site neighbouring the Kalasatama Centre. It serves the inhabitants of the whole Kalasatama area.