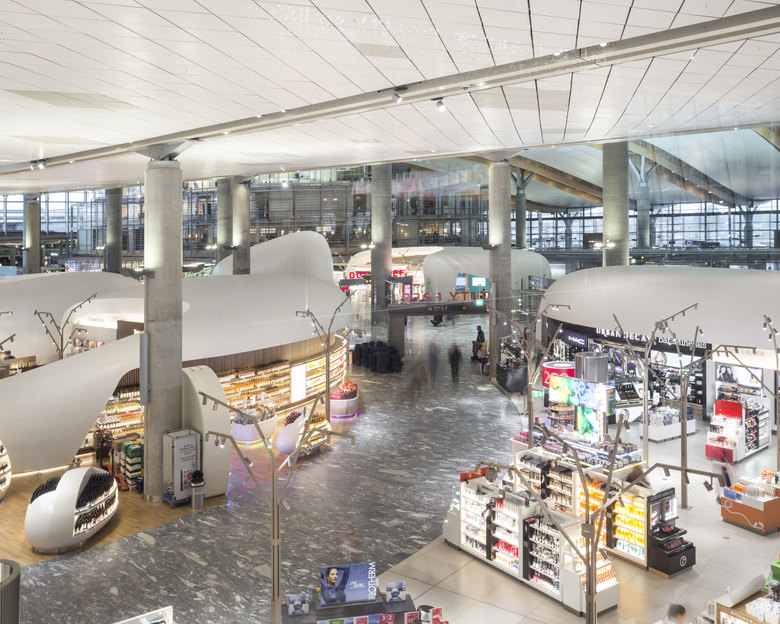 Lindner AG constructed the duty free area of the terminal with its five "pavilions", each of them housing a shop. 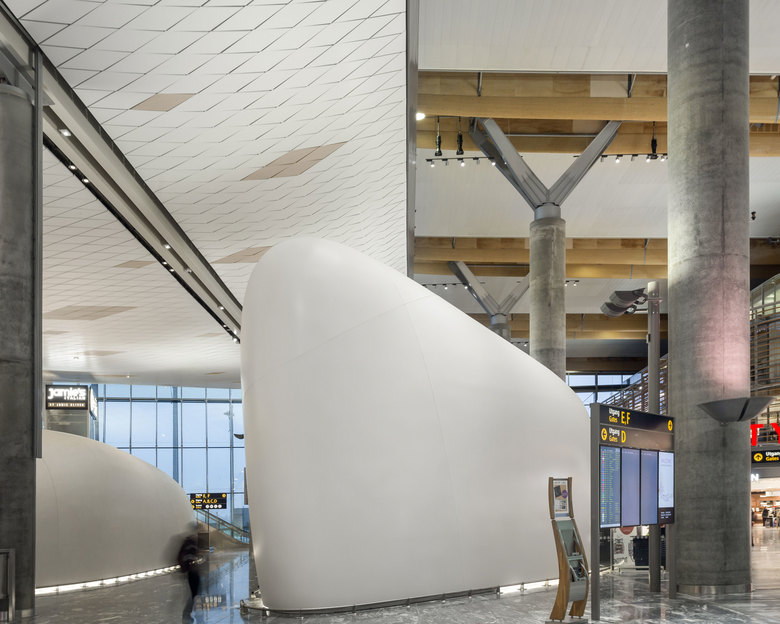 The support structure of the pavilions was executed with wood due to numerous reasons. Afterwards, it was panelled with gypsum fibre and then finished with lime plaster. 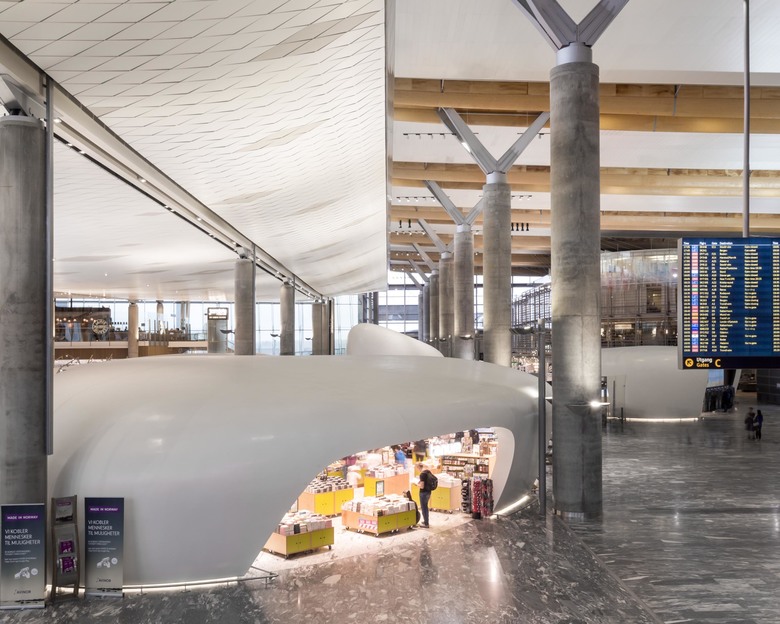 The organic form and the demanded level of fire protection were achieved with a multi-layered convex gypsum cladding. 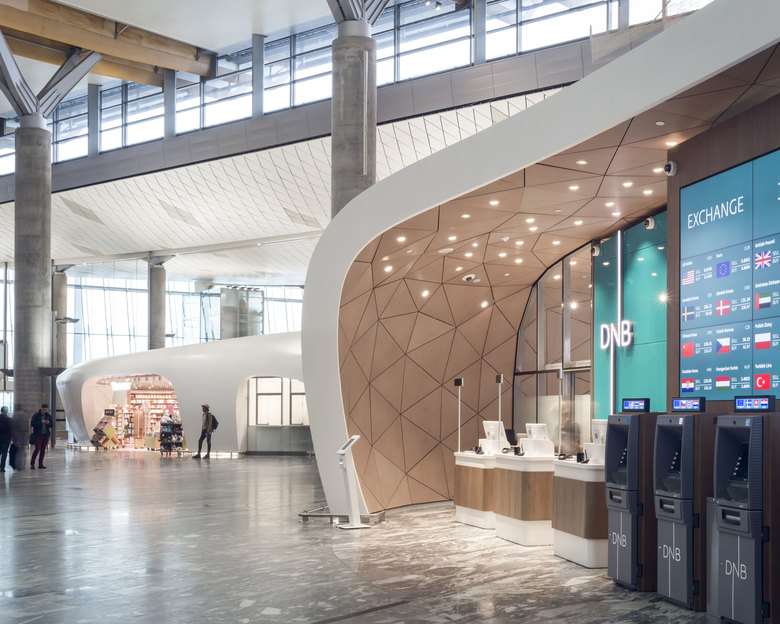 The interior hull was cladded with triangular metal panels. Due to the irregular forms within the pavilions, each panel is unique. Their substructure also needed to be developed specifically for this project. 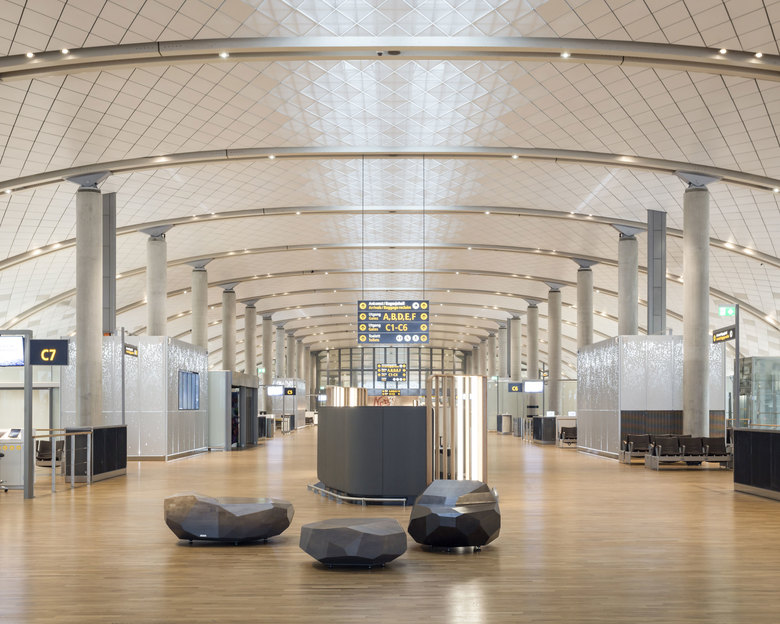 Thanks to 20,000 sqm of FLOOR and more® power comfort Hollow floors with integrated heating and cooling technology, the temperature within Pier North can be effectively controlled. The additional specification "power" further increases the flooring´s resiliency for the high levels of passenger traffic and weight loads. 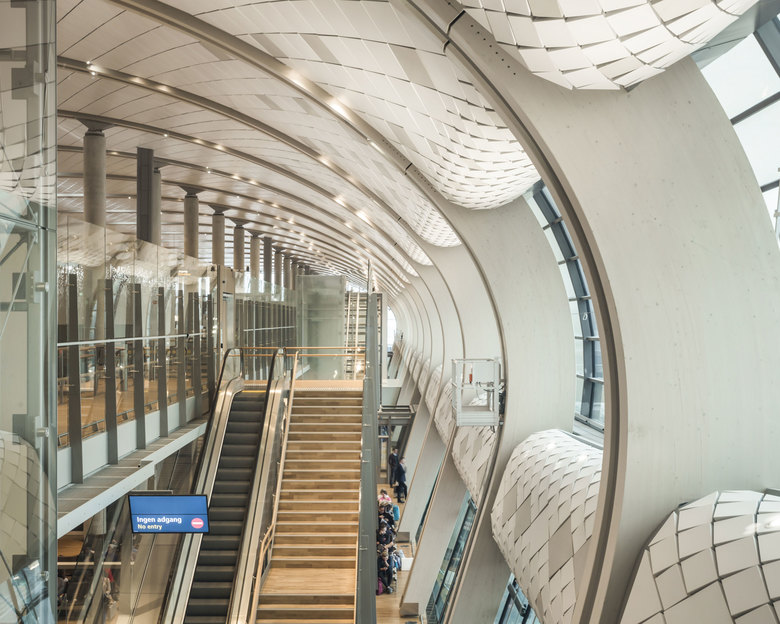 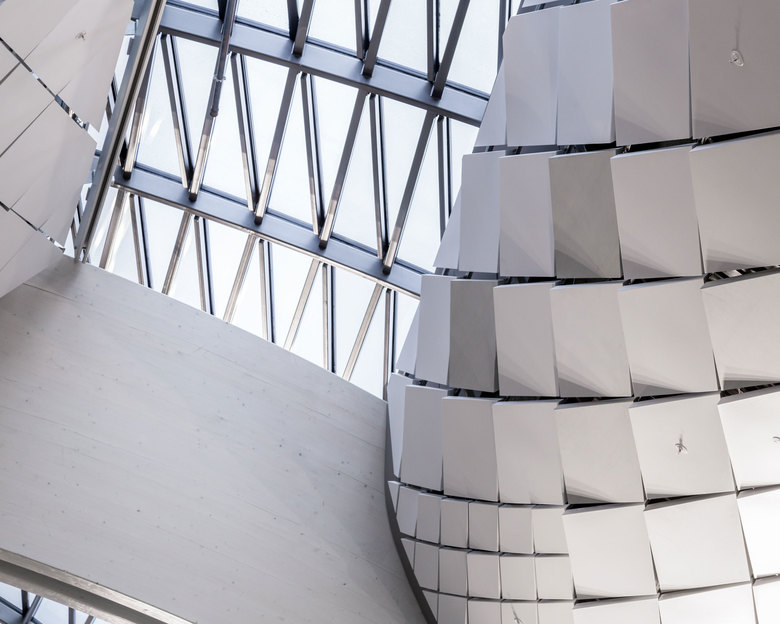 The terminal received a very well-considered illumination concept that strongly relies on natural light through the glazed facades. Numerous light fixtures are installed as support. 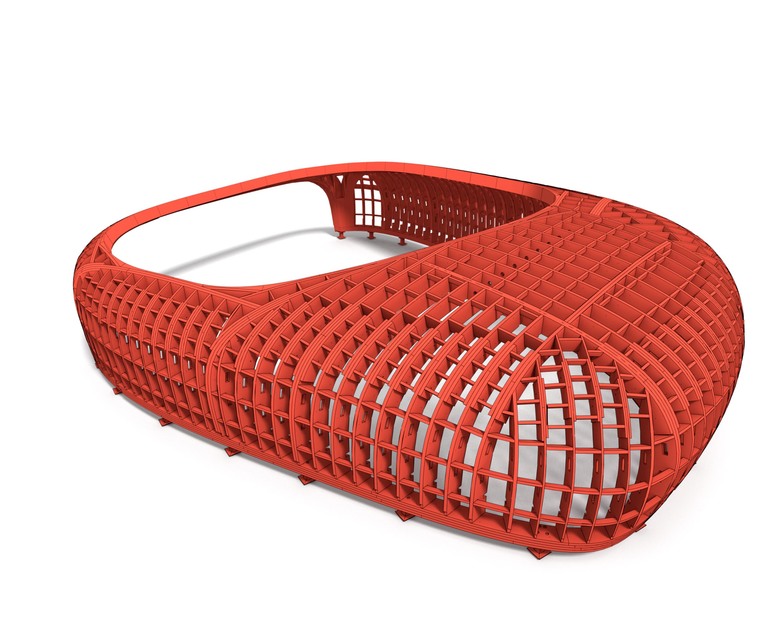 The planning of the pavilions was carried out completely in 3D as a part of "Building Information Modelling". Over 10,000 unique pieces were milled, delivered and installed in time in this way.
Drawing © Design-to-Production GmbH 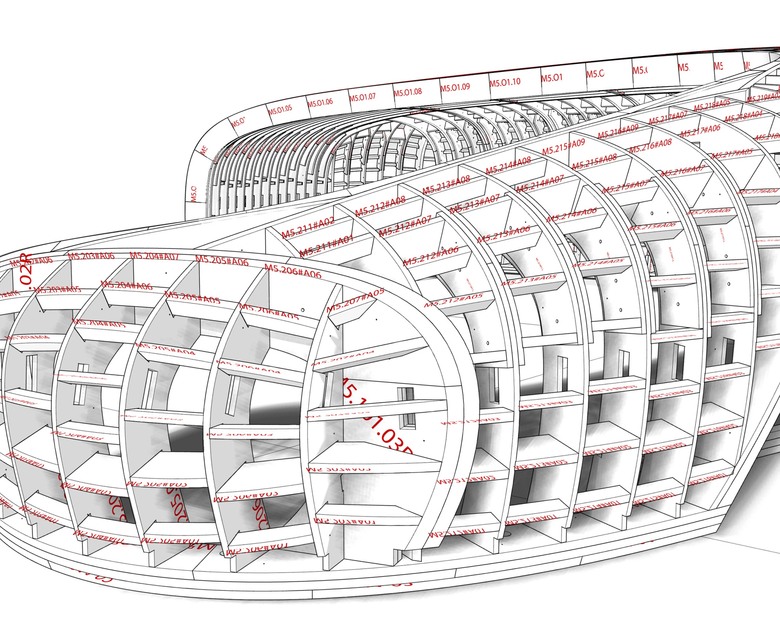 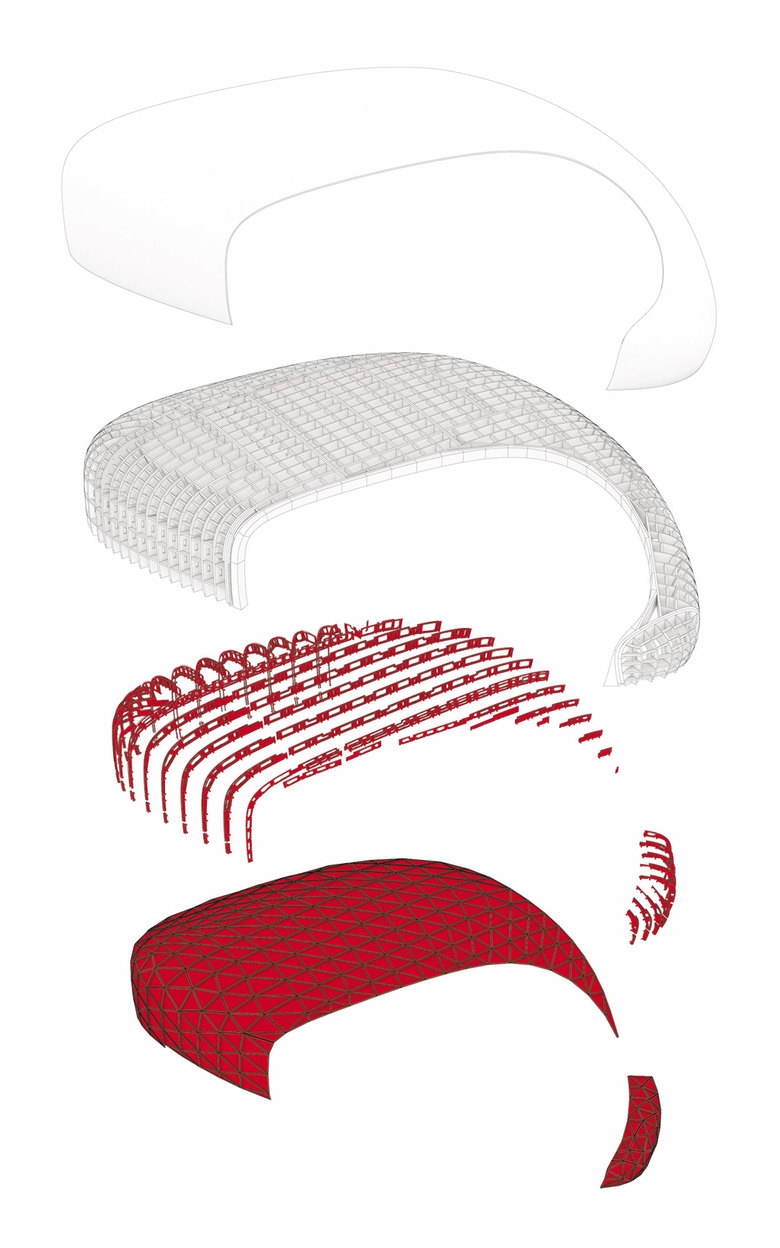 In the course of a large-scale extension project, Oslo Airport extended its capacities to about 30 mn passengers per year. This project brought a western extension of the main terminal as well as the new construction of an additional pier, the so-called “Pir Nord”. The latter is 300 metres in length, thus doubling the former size of the airport and extending it by 11 new gates and additional areas for restaurants, shops and restrooms.

Lindner AG proved its expertise in complex custom solutions during this construction project: the company was contracted with the development and planning of five individually formed pavilions as well as their construction during regular terminal operation. This contract was put into practice in cooperation with the client Avinor and the executing architects of Nordic. As to the pavilions’ free-form geometries, Lindner recommended a change from the initially planned steel construction to the lighter material wood. This also resulted in a reduction of logistics efforts. The complete support structure was built in a detailed 3D planning and executed with a laminated wood frame structure. These woods needed to be milled uniquely, which amounted to over 10,000 individual parts that were numbered for exact and quick fitting on site. This approach allowed Lindner to put the demanded lengths, widths and heights into practice and in accordance with the statics requirements. The organic form and the demanded level of fire protection were met with a multi-layered convex cladding of bendable gypsum fibre boards on the exterior hull. The exterior skin is finished with a mineral lime plaster, whose structure and colour was decided upon only after several workshops with the architects. The interior hull was cladded with triangular, acoustically effective metal panels. Due to the irregular forms within the structures, each of the some 8,000 panels is unique. Their substructure also needed to be developed specifically for this project. With their successful completion, the pavilions now house a duty free shop, a bookstore, a bank branch, a bakery and a shop for women´s clothing.

Apart from the pavilions, Lindner also produced and delivered the diamond-shaped ceiling and wall claddings of the new pier, about 18,000 sqm in total. Furthermore, about 20,000 sqm of the hollow floor system FLOOR and more® power comfort have been installed through the long-term local partner Sana Bygg AS. It enables temperature control through an integrated heating and cooling system.