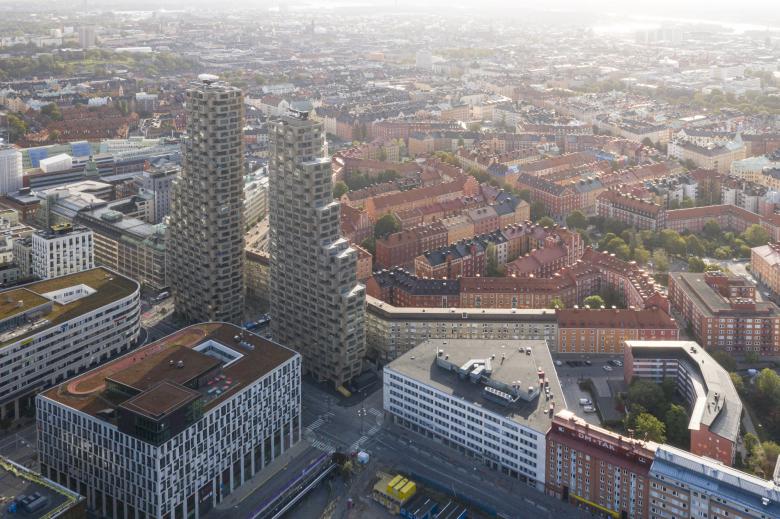 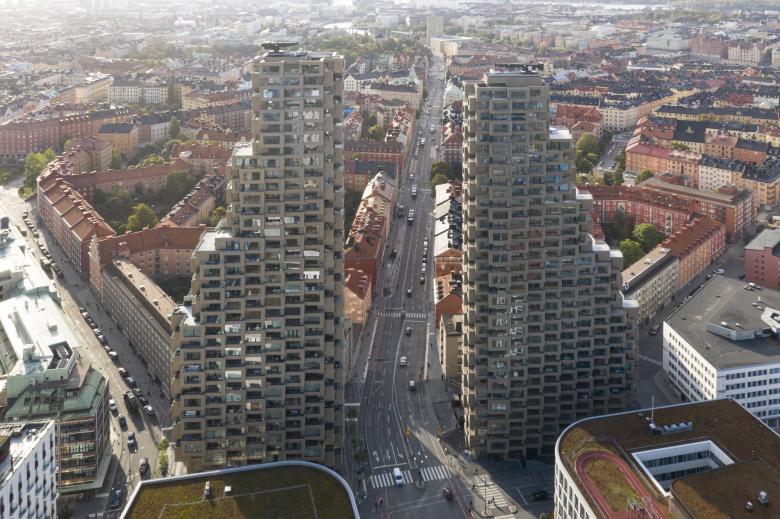 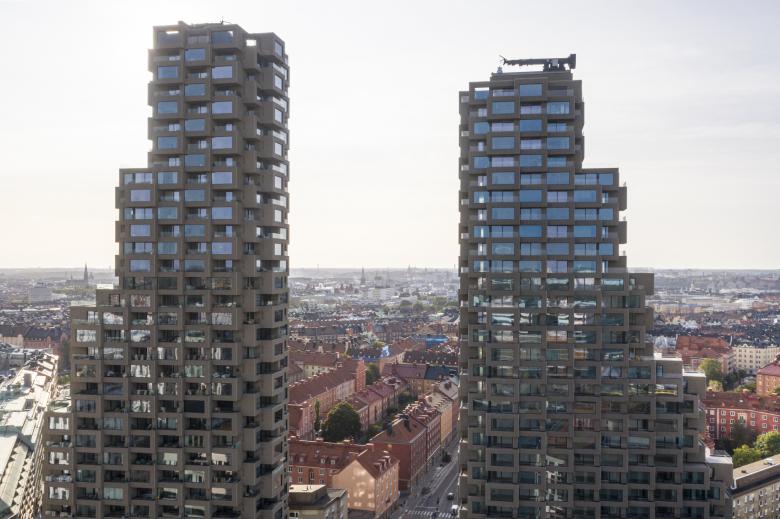 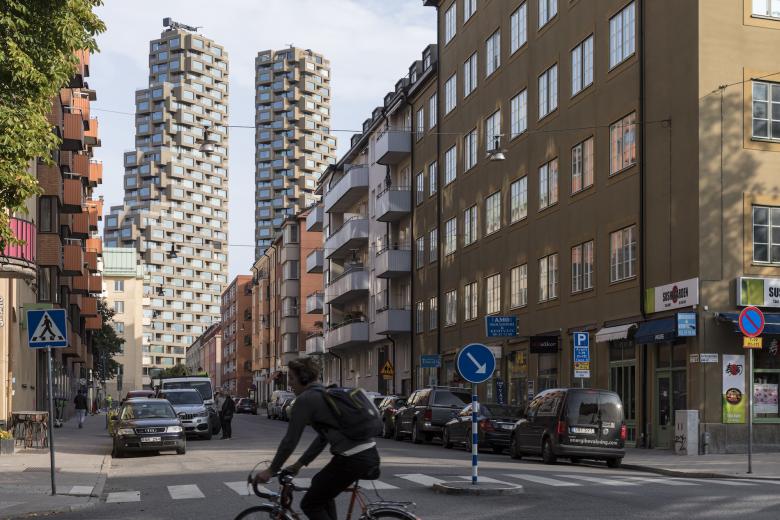 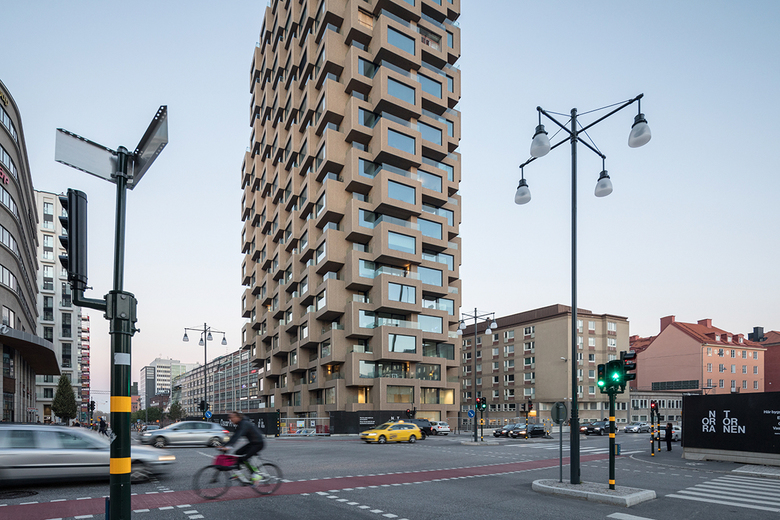 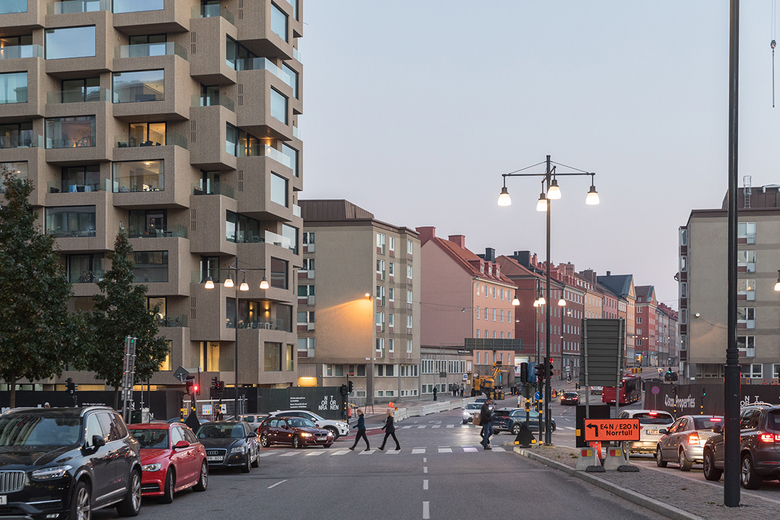 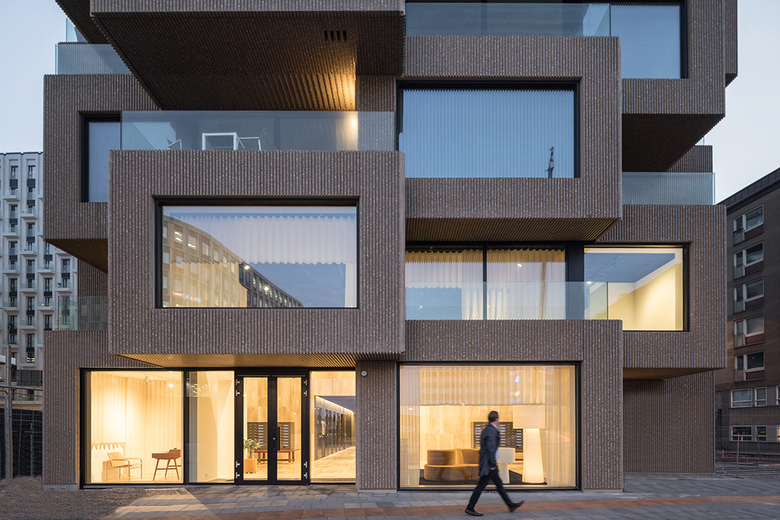 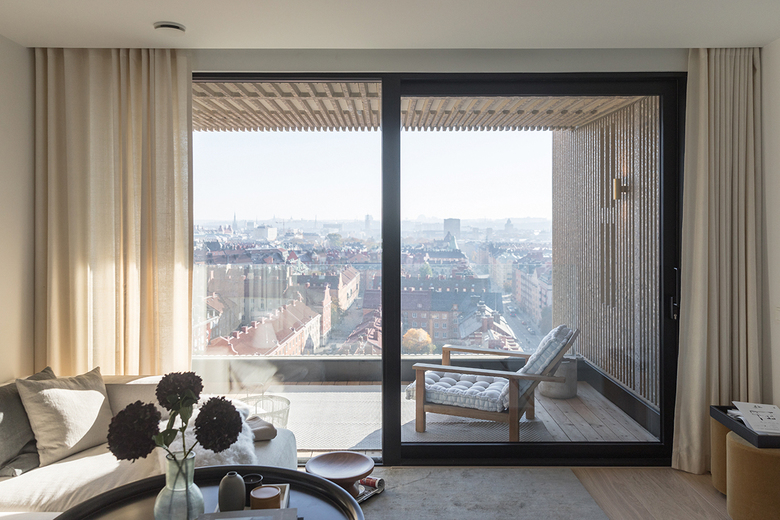 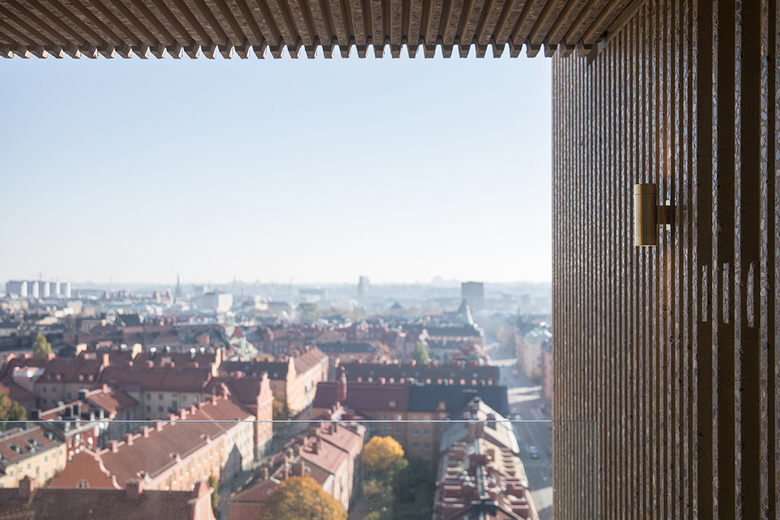 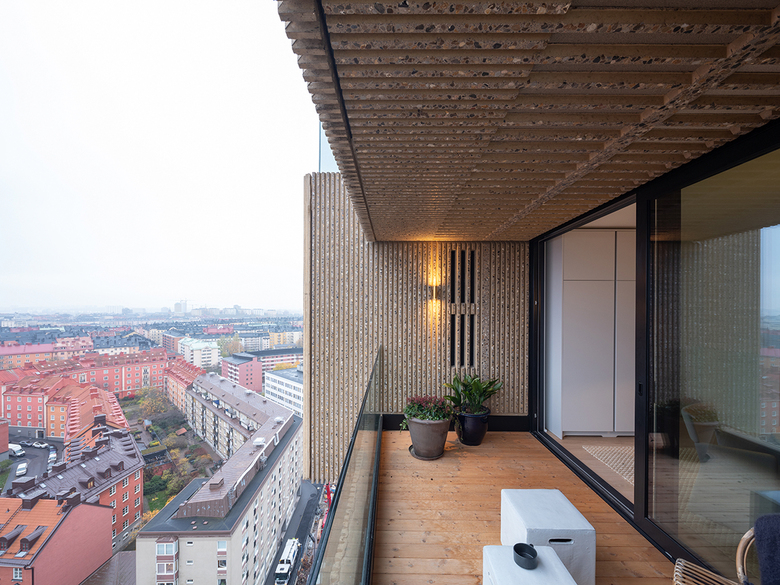 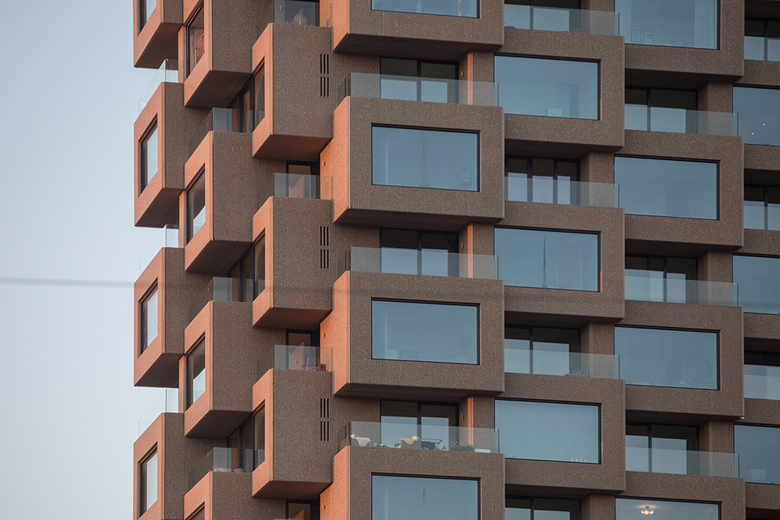 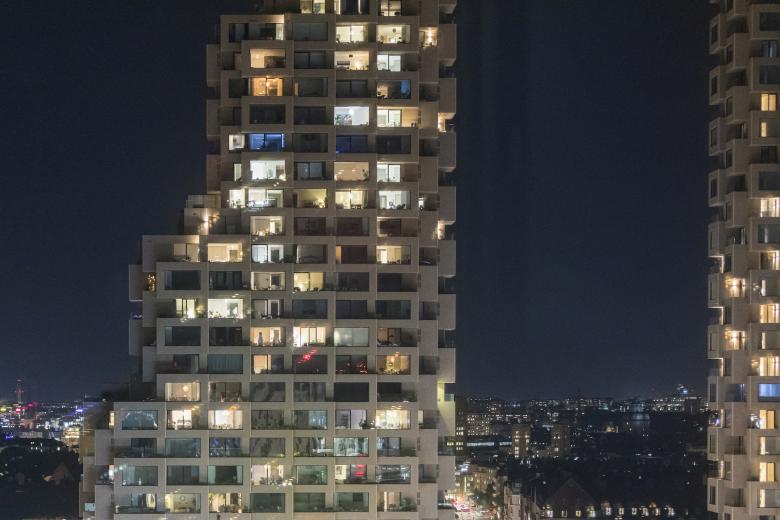 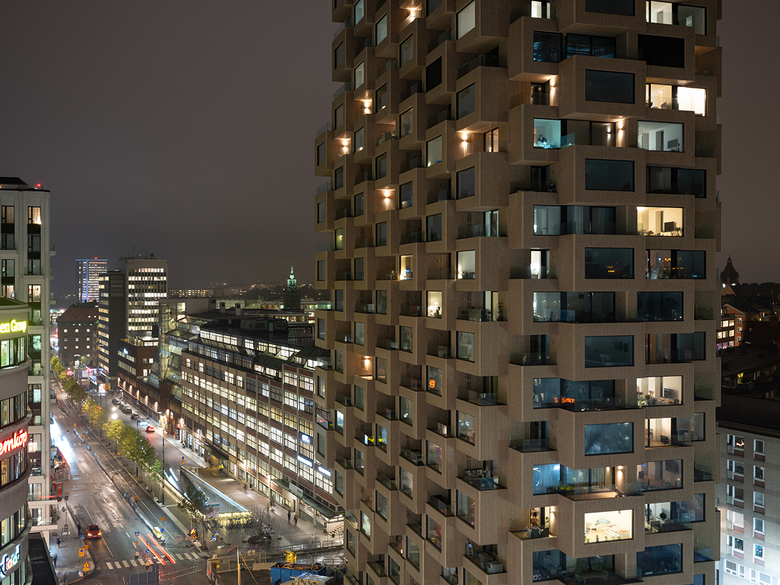 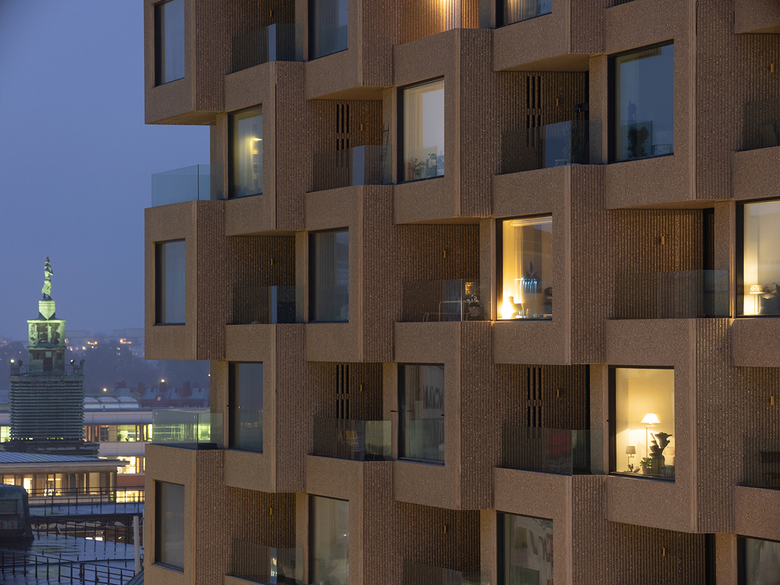 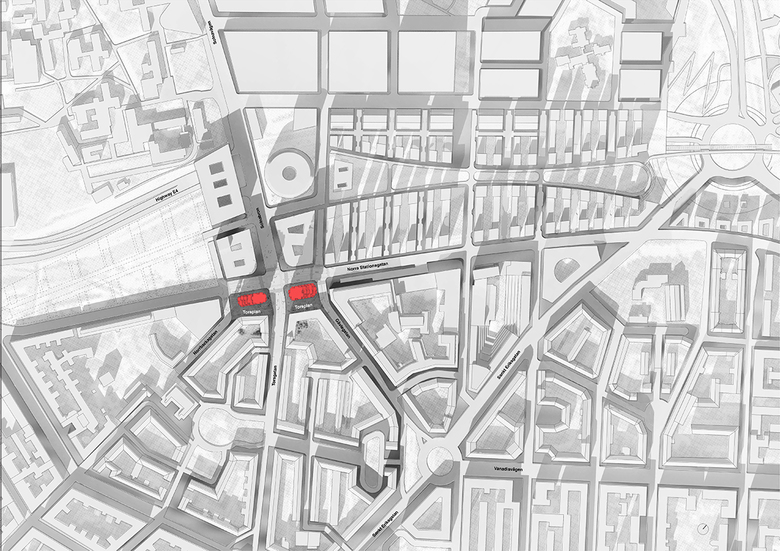 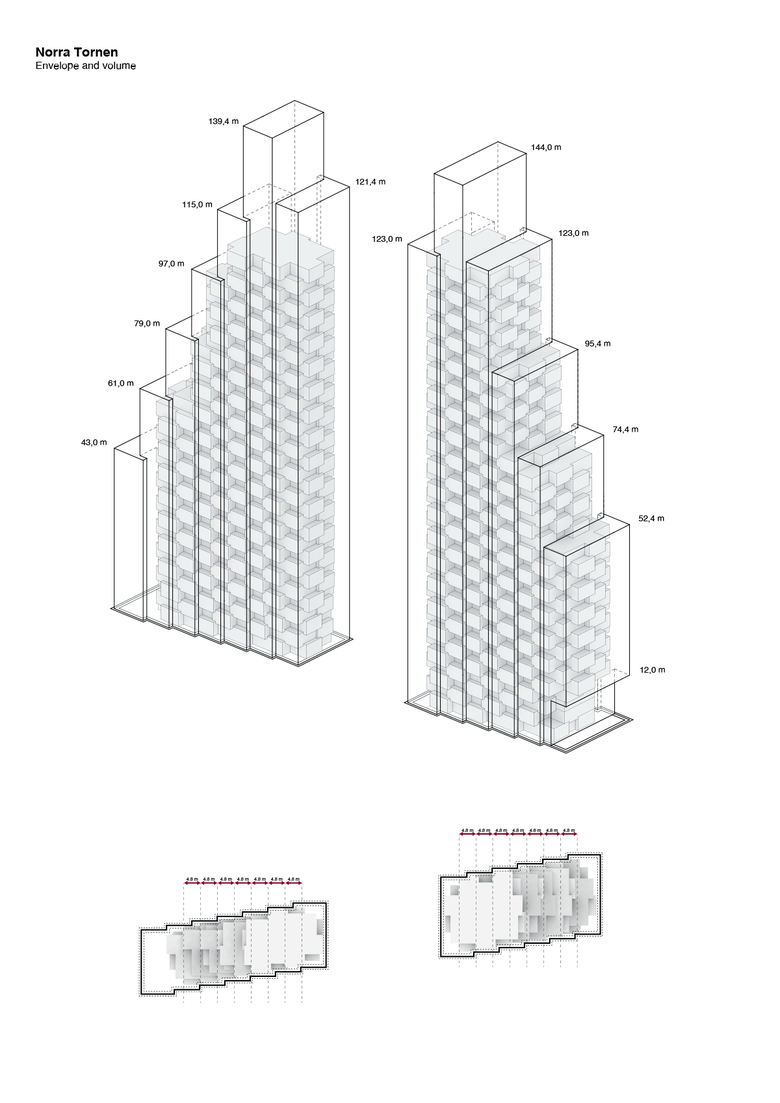 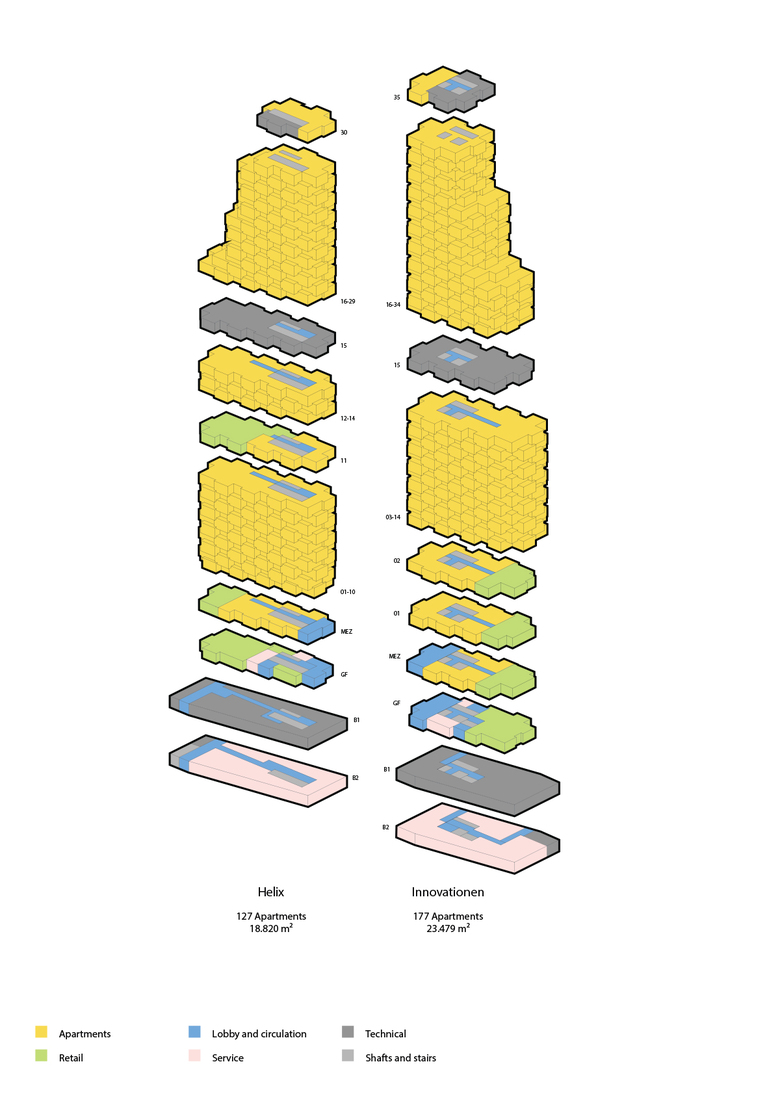 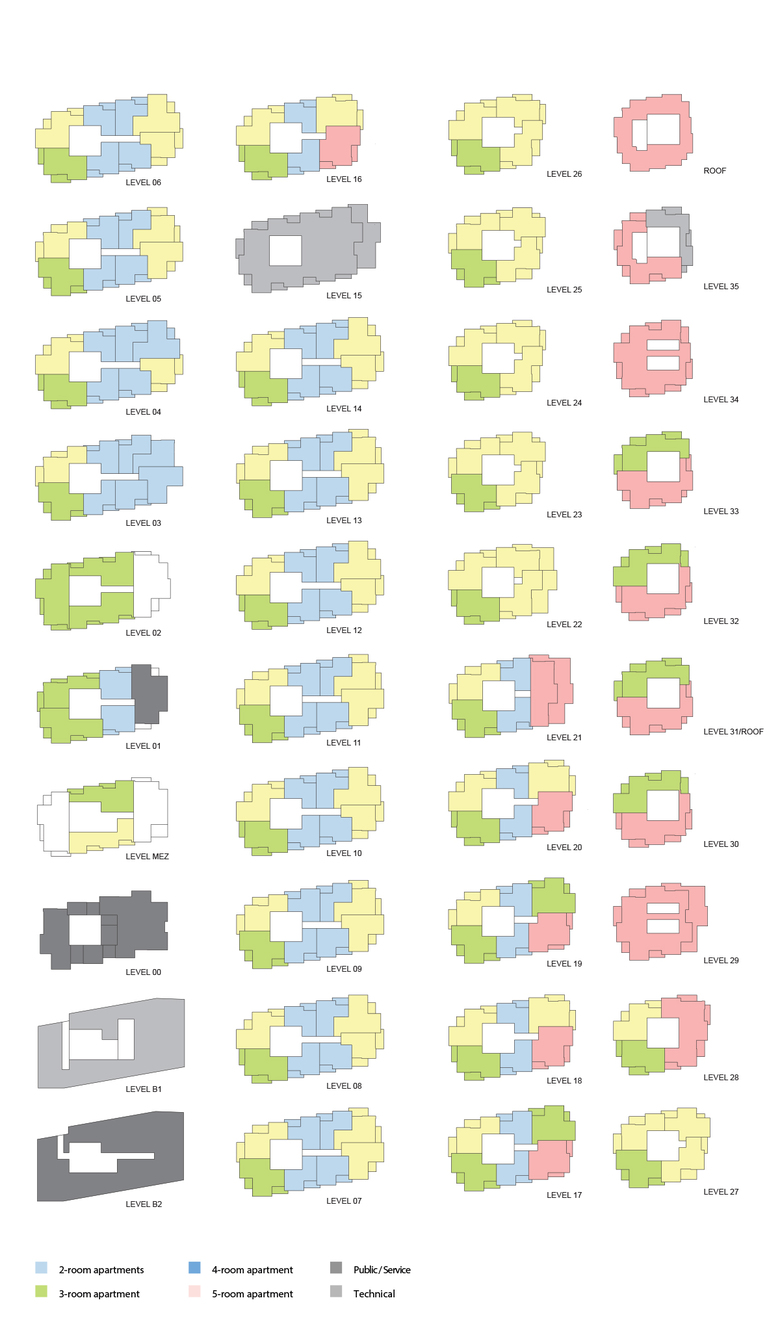 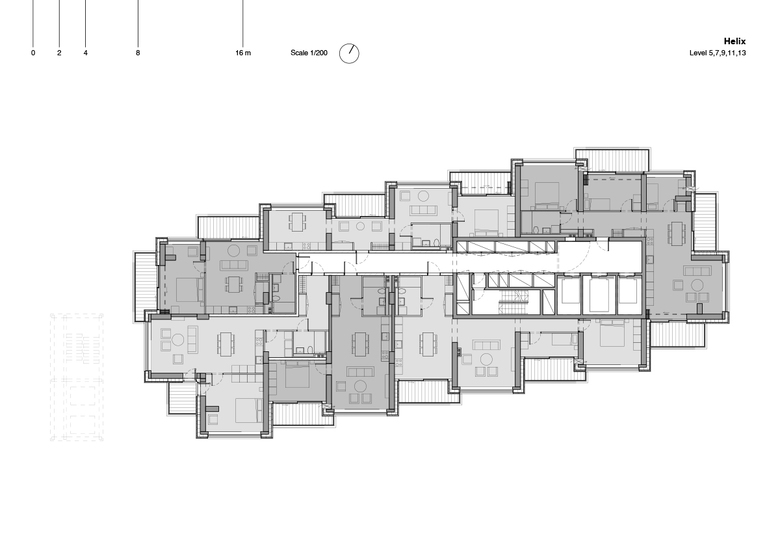 The Norra Tornen project started with two inherited building envelopes, the remains of a cancelled project initiated by the former city architect Aleksander Wolodarski. Each a kind of 'crescendo' composition of different heights – neither slab nor tower – prohibit the unfolding of an uncompromised typology. Conversely, the opted program, apartments with an emphasis on large outdoor spaces, prevented too literal a translation of the envelopes into architectural form.

Through a kind of 'Freudian flight forward' – a passionate embrace of the inevitable in order to conquer and overcome one's initial fears – the prescribed building envelope was adopted as a given. Its initial vertical segmentation was complemented by a second, horizontal segmentation that gives the buildings' exterior a single, homogeneous treatment: a rough skin, formed through an alternating pattern of withdrawn outdoor spaces and protruding living rooms. The chosen material, ribbed colored concrete brushed with exposed multi-colored aggregate pebbles, echoes brutalist architecture and that is not by chance. According to architecture critic Reyner Banham, the term brutalist architecture was invented by Hans Asplund, the son of Gunnar Asplund, when referring to a design of his studio colleagues in a letter to his British architect friends.

Concrete at Norra Tornen comes in the form of prefabricated panels – a construction technique that allows work on the building site to continue even below the five-degree Celsius limit which prohibits in situ concrete pouring. Prefabrication also significantly reduced construction costs. This way a design with a wall-to-floor ratio close to 1 – most developers would be discouraged by a 0.5 ratio – was suddenly not an unthinkable proposition. The investment could be channeled in creating apartments with unique layouts, multiple orientations and extra square meters of windows – a precious asset in a country with scarce daylight for half of the year. In a city center with a housing stock largely built before the Second World War, Norra Tornen introduces a new way of living which brings together density with the possibility to enjoy outdoor space (Stockholm ranks fourth among the cities with the highest air quality in the European Union).

The Innovationen Tower comprises 182 units ranging from 44 sqm one-bedroom apartments to a 271 sqm penthouse on the top floor, with the majority consisting of two- or three-bedroom apartments of 80 to 120 sqm. The residential units are complemented by a cinema room, a dinner room for parties and celebrations, a guest apartment, a gym with a sauna and a relaxation area, and retail space at the ground floor. The Helix Tower includes 138 units, plus amenities.

At a height of 125 meters, and 110 meters, respectively, the two towers are the highest residential buildings in Stockholm’s city center. Located in Hagastaden, a new district in the north of Stockholm developed around the Karolisnka Institute (which awards the Nobel Prize in Medicine), they stand as a gate to the city. However, the manipulation of the initial building envelopes radically transforms their initial implied architecture of monumentality. It gives way to an articulation of domesticity. A once formalist structure comes to house apartments that are surprisingly informal...one could even say humanist.

Other Projects by OMA - Office for Metropolitan Architecture