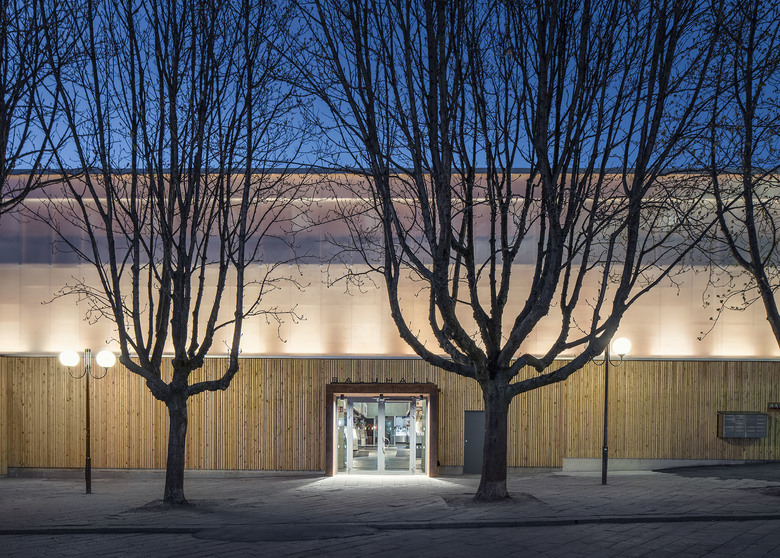 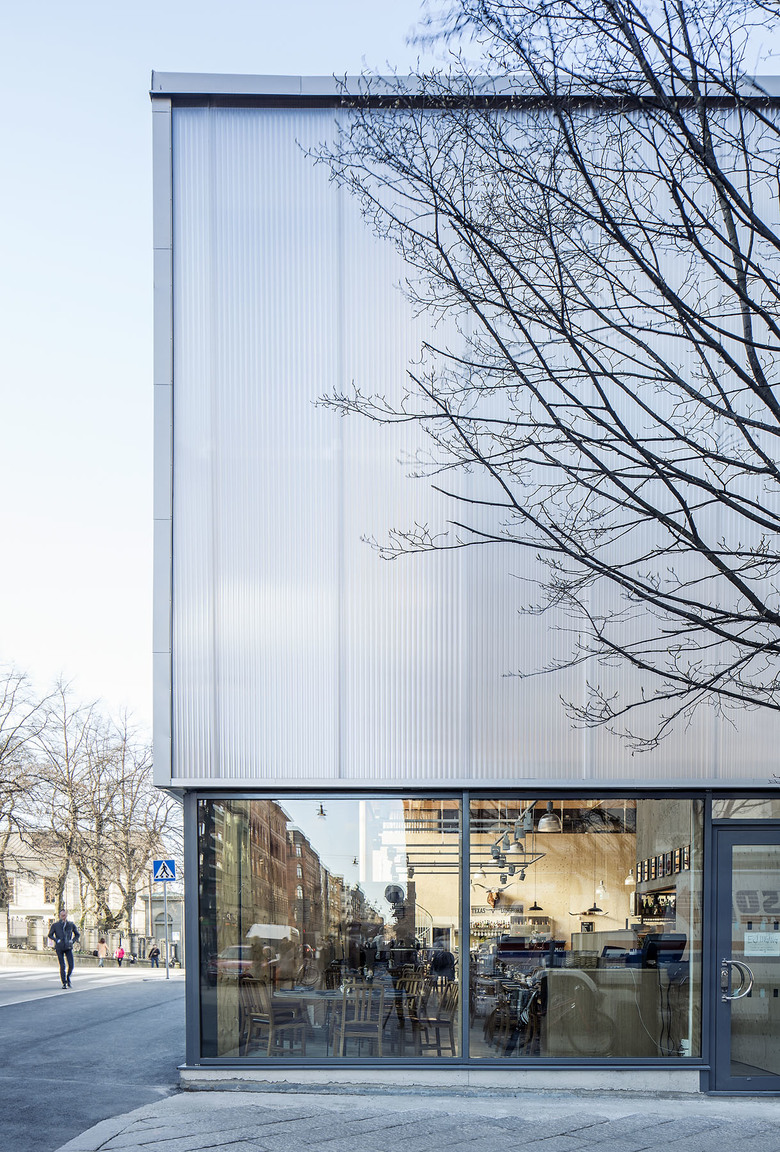 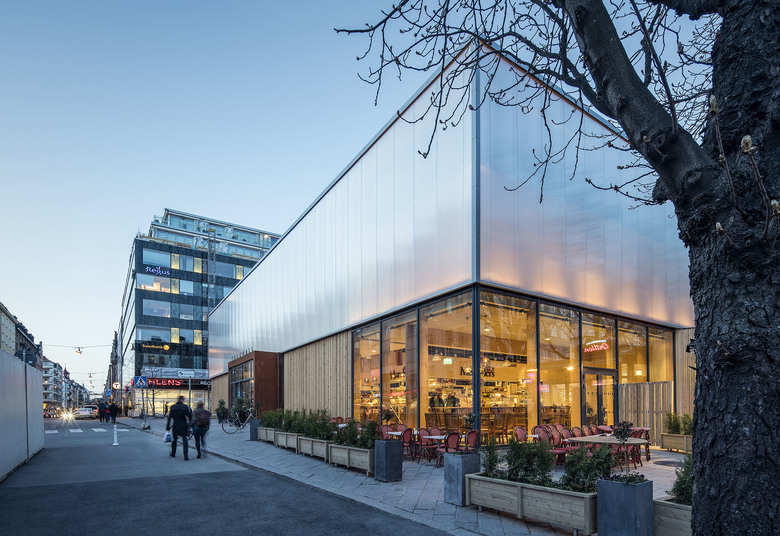 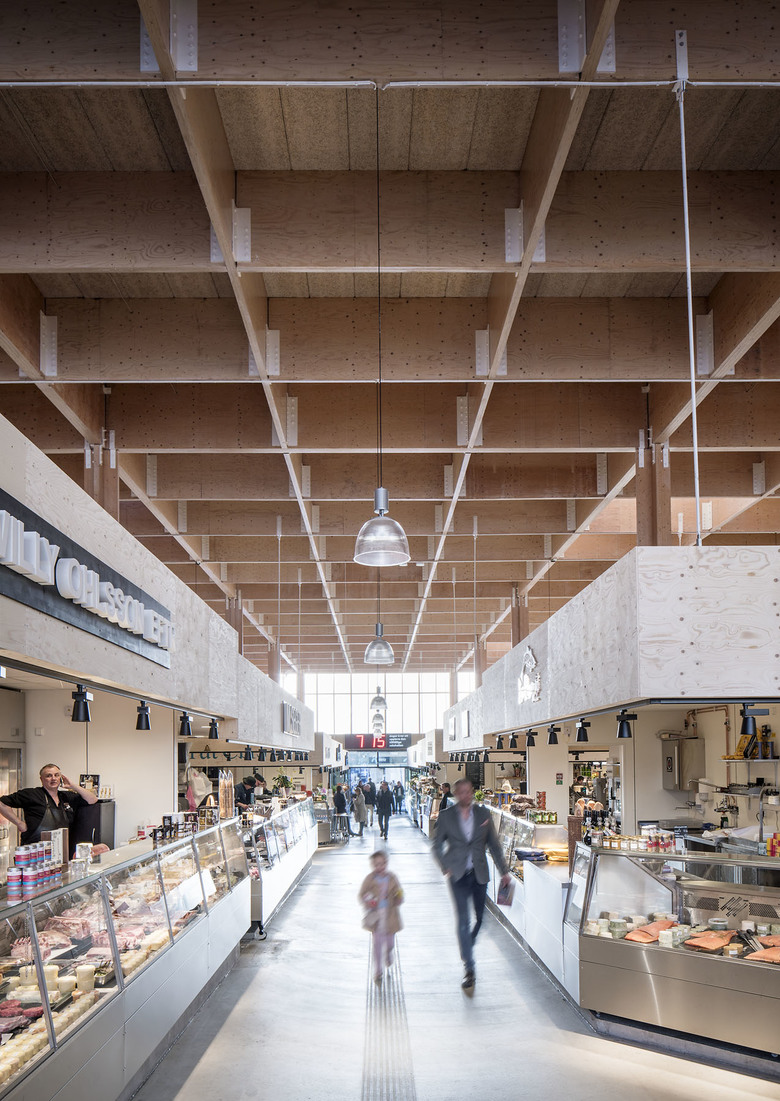 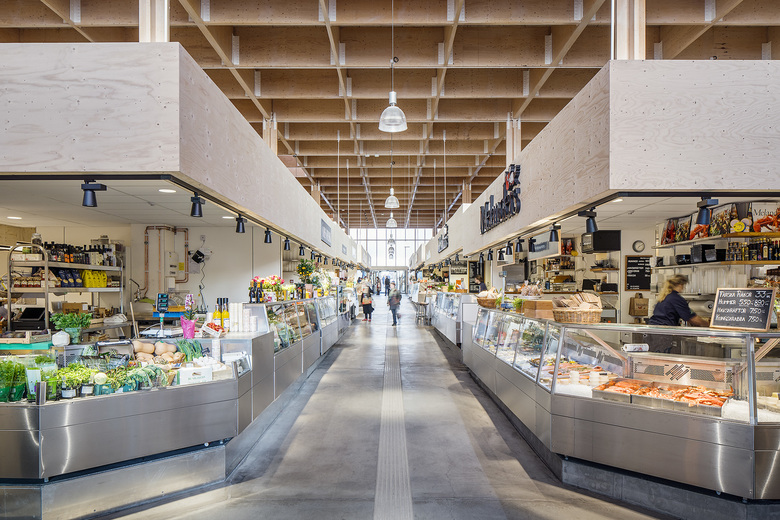 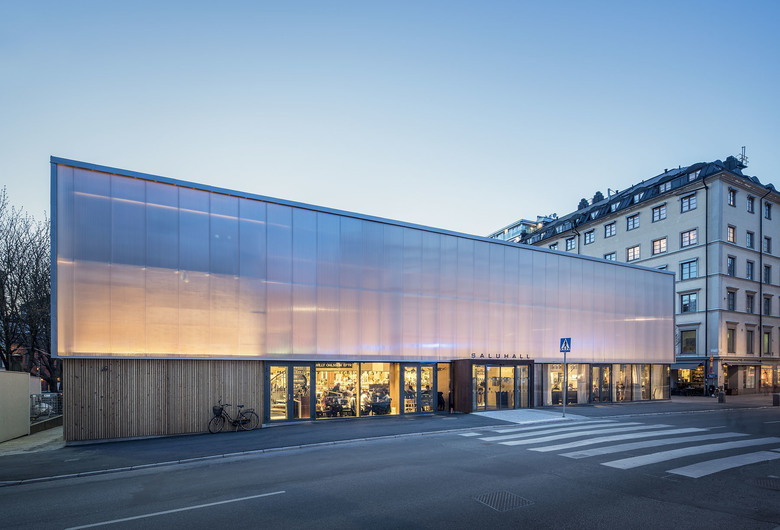 When the decision to renovate the historic Östermalm's Market Hall was taken, a smart solution was needed to provide alternative accommodation for the Market Hall's retailers during the two year long renovation period.
While the old Östermalm's Market Hall is being refurbished, a temporary Market Hall will be erected in the middle of Östermalm’s Square in Stockholm. This will house most of the retailers and kitchens and enable this important institution to continue to function in the heart of Östermalm. The new temporary building covers an area of 1,970 square metres (58 m x 34 m and 9-11 m in height).
The existing Östermalm's Market Hall is internationally renowned and a fantastic food destination for all Stockholmers as well as tourists. The Market Hall's popularity has a significant impact on its surroundings creating a strong flow of visitors that benefit other retailers in the area. To simply close the food hall for renovation was not an option. The solution was a temporary Market Hall on Östermalm's Square – the origin of market trade in the area before the existing Market Hall was erected 127 years ago.
The temporary building's construction consists of a prefabricated timber frame, with a facade of vertical wooden battons on the lower part and translucent multiwall polycarbonate sheeting on the upper part. Along the eastern facade and south west corner of the building the wooden facade gives way to glazing providing views into the Market Hall and views out for restaurant diners. The building is designed and built with a modular system that enables quick erection and dismantling with the possibility for subsequent reuse at another location. The hall is planned to open for business in April, 2016.
Market stalls, restaurants and storage are located on the ground floor; while kitchens and technical installations are located on the two mezzanines that stretch along the Northern and Southern facades. The market stalls are situated along wide, straight thoroughfares and the main entrance faces that of the old market hall on the corner of Nybrogatan and Humlegårdsgatan. The Market Hall's generous ceiling height and rooflights allow good daylight penetration throughout the interior space and emulate the principles and grandure of the existing hall.
The extensive network of existing underground installations buried under Östermalm's Square and difficult ground conditions have provided a serious challenge for the project. The square has a slope of approximately 1.9 m across its length and a metro station located directly underneath. The outcome will be several permanent improvements for Stockholmers such as replaced sewer pipes and a modern vacuum waste collection system for the square and Market Hall.
Considerable care has been taken to design the temporary Market Hall with a sense of quality befitting the historic Market Hall while using light weight, cost efficient and sustainable materials befitting the temporary nature of the building. The goal has been to create an attractive temporary addition to the heart of Östermalm that has a positive effect on its surroundings day and night. Full of activity and life during opening hours and a warm shining beacon when the facades translucent polycarbonate sheeting is lit up at night.