Terrace houses with a rooftop park 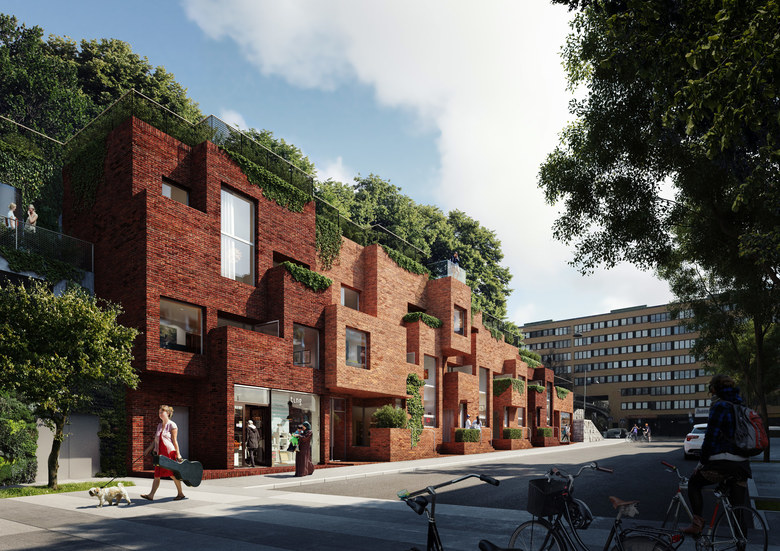 One of three new housing blocks in Hornsbruksgatan. 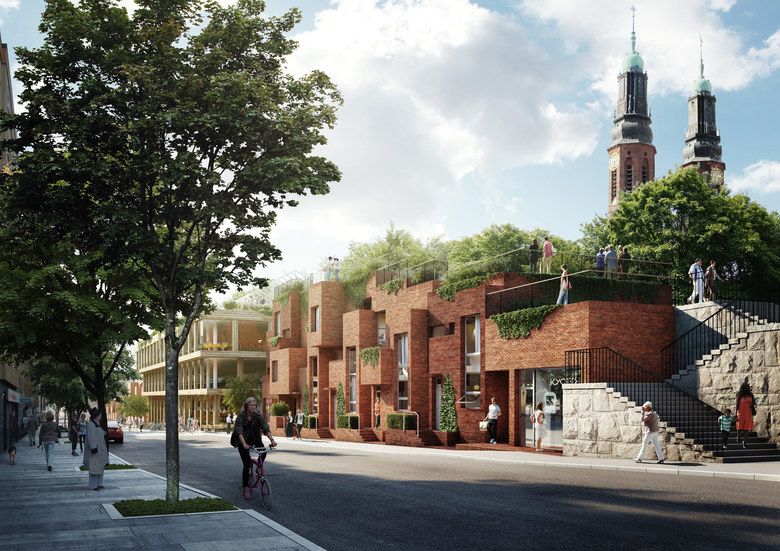 View from the east.

The three housing blocks and the new metro building planned on Hornsbruksgatan. 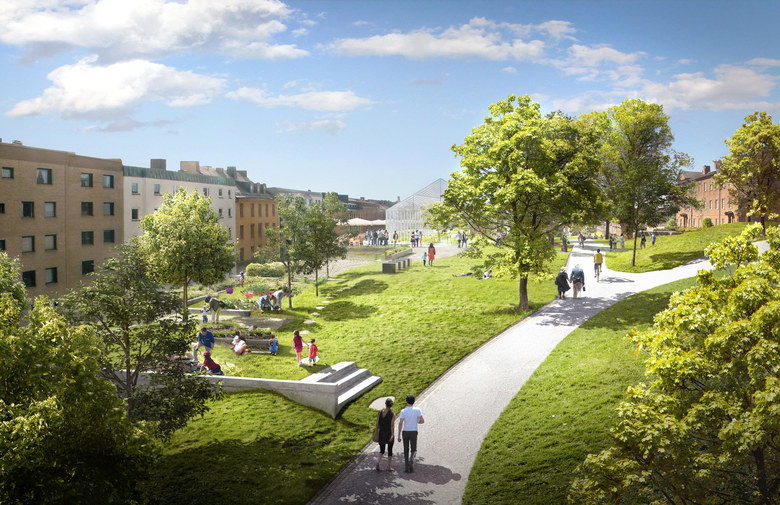 A public park area is planned on top of the housing units. 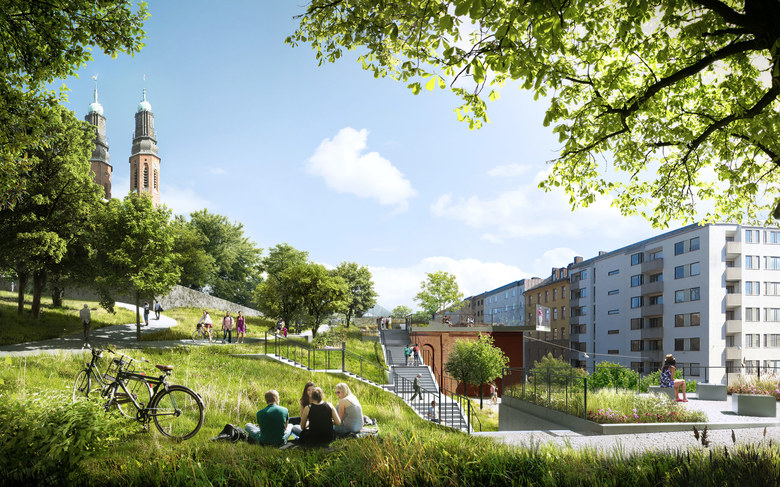 Högalid Park, viewed from the west.

Utopia Arkitekter has, on behalf of Veidekke Bostad, devised a scheme for new housing development along Hornsbruksgatan in the Södermalm district of Stockholm. The scheme comprises three buildings with a total of 29 dwelling units, namely 17 terrace town houses and twelve flats. The buildings are sited on the southern fringe of Högalid Park and include a new public rooftop park. The plan is awaiting approval from the municipality.

The Hornsbruksgatan redevelopment scheme involves four buildings altogether – a new metro (T-bana) building and three housing blocks. The new buildings will be two to three storeys high and will include a new public rooftop park. The three existing flights of steps between the park and Hornsbruksgatan will be replaced with three new ones. The housing blocks are both beautiful and functional, at the same time presenting smart solutions to a large number of on-site challenges. In addition, the scheme presents a unique and very attractive form of housing – terrace town houses – in the heart of Stockholm.

The forecourts are surfaced with brick pavers, and climbing plants will create a green façade which can eventually reach up to the park vegetation on the roofs. The separate entrances to the terrace houses, together with non-housing premises, add up to a living street environment. The façades are punctuated by bay windows, patios, atrium courts and staggered fronts, to create a varied, living impression. At several points the park will have viewing points on top of façade projections. The brick façades of the housing blocks are for the most part similar in colour to the brickwork of nearby Högalid Church. The overall pattern is broken up by patches of brickwork in various shades of colour, some of which are to be more expensively treated, e.g. with glazed brick.

The present detailed development plan proposes housing development in the form of three new housing blocks (totalling some 30 dwelling units) and a new metro (T-bana) building along the north side of Hornsbruksgatan. All ground floors are duplex (two-storey) terrace housing units with separate entrances on the street side. Retail or restaurant premises on the ground floor. Buildings 2 and 3 also have flats on the upper storey, accessed from a stairwell next to the terrace housing entrances. Some corners of the buildings are given over to non-housing premises and shophouses. Businesses and entrances on the ground floor. A public parklands is planned on top of the housing units, as an extension to the existing park space. The new park extension has been designed by the LOLA/Lovely landskap landscape architects.

The Hornstull metro station is neglected and in need of refurbishment. The new building, designed by Tham Videgård Arkitekter, will have three storeys, the top two of which are planned to house offices and possible urban centre functions such as services, a restaurant, shops or a health centre. A market garden with a year-round eco-café/restaurant specialising in locally grown produce is planned on the roof of the new metro building. The rooftop is also intended to accommodate a public roof terrace with a cafeteria/shop. Access to the park will be facilitated by a public lift from Hornsbruksgatan to Högalid Park.

Stockholm is one of the fastest-growing cities in Europe and needs more housing. I am happy that we can now go ahead with our plans for developing Hornsbruksgatan into a real city street with new homes and more opportunities for relaxed urban living. The idea is for the new housing blocks also to provide more public park space than exists at present, and accordingly it is proposed to make the rooftops an extension of the existing Högalid Park. This ”Park Roof” faces south, to the benefit of those wishing, for example, to have an evening BBQ, sunbathe or grow their own produce.