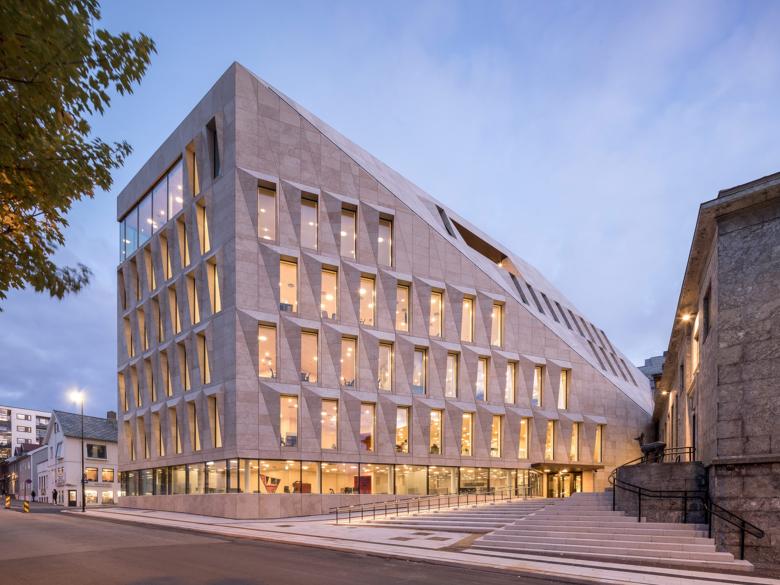 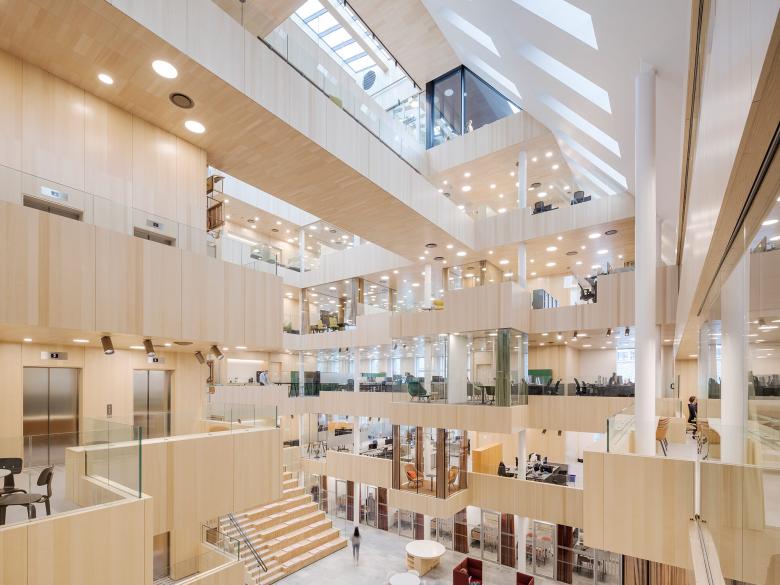 The heart of the new town hall in the Norwegian town of Bodø is the five-storey atrium. 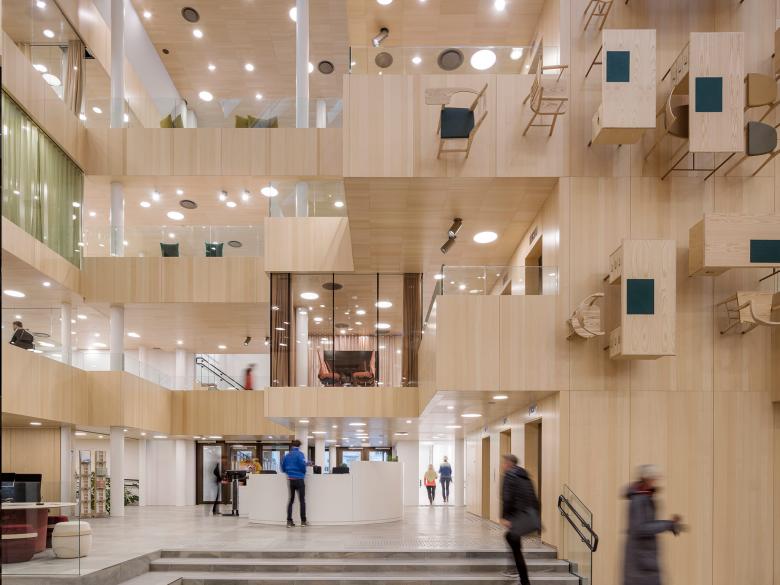 The entire atrium was equipped by Lindner IP with acoustically effective wall claddings in ash veneer. 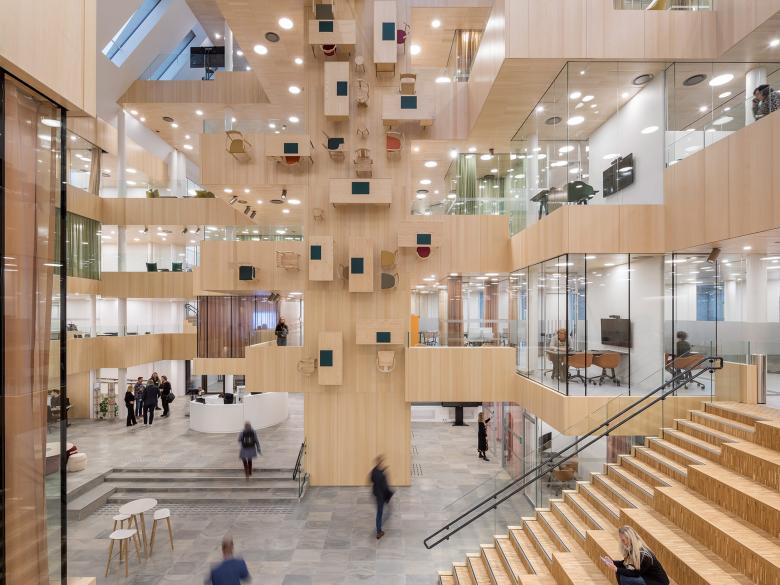 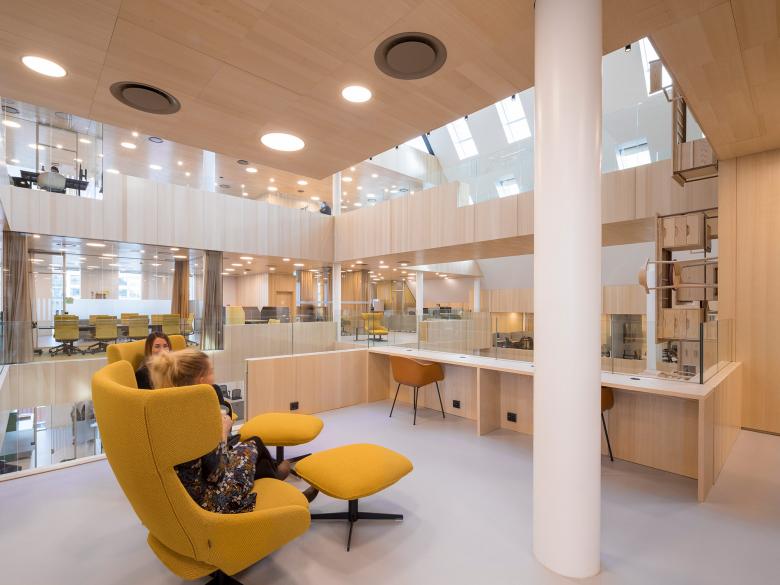 Transparent glass balustrades and fixed glazing let a lot of light into the open office areas.

Another highlight is the view from the canteen on the top floor. 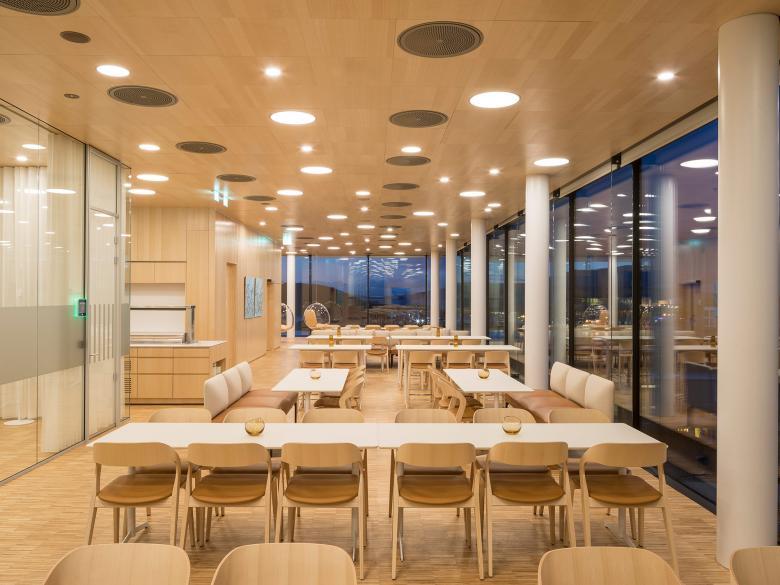 Lindner also installed the wall and ceiling cladding made of ash veneer combined with glass partitions in the canteen area. 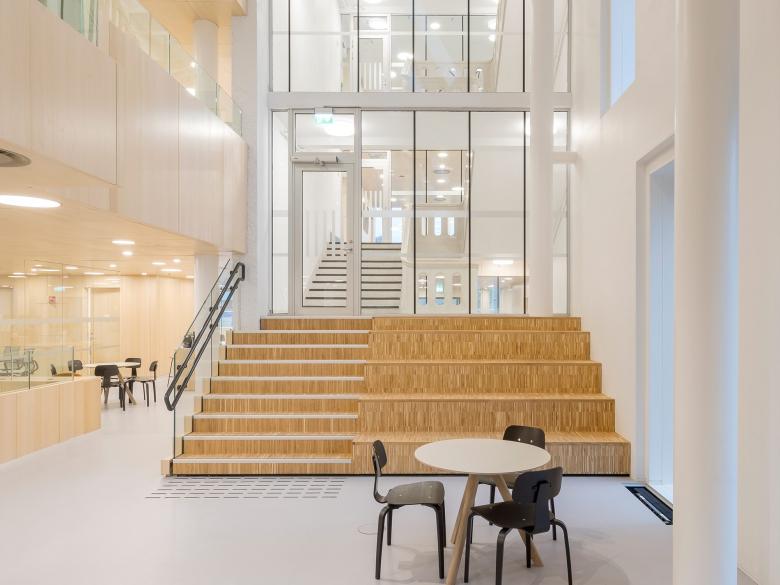 Transparent transitions can also be found again in the atrium, e.g. the staircase with fire-protection-tested fixed glazing with elements of up to 3.10 metres. 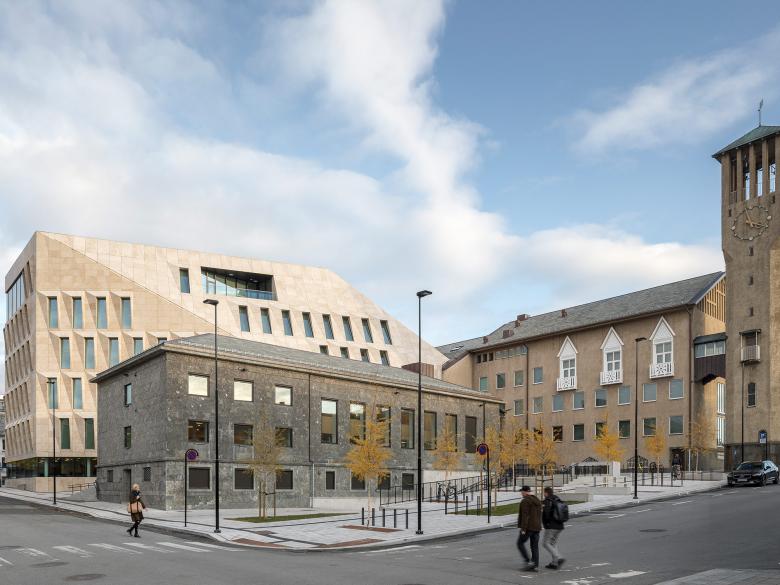 The Lindner Group with its International Projects division, together with the installation teams of Lindner M+S and local partners, was involved with a wide range of services. + S assembly teams and local partners.

Play with perspectives in the town hall of Bodø Norway

The architects ALL | Atelier Lorentzen Langkilde Copenhagen have come up with a special stylistic element for the town hall of the Norwegian municipality of Bodø: in the five-storey atrium, visitors are welcomed by a vertically arranged office landscape, projecting meeting cubes and balconies, the overall appearance of which is reminiscent of the optical illusions of M. C. Escher. As a calm contrast to this, ta uniform interior design in ash and oak was chosen. The project management of the fit-out project came from the Lindner Group with the International Projects business unit.

The town hall of Bodø in Norway was the northernmost building project the Lindner Group carried out so far – Bodø is even located north of the Arctic Circle. Despite extreme weather conditions like long midsummer nights to complete darkness and icy winds in winter, the city counting 50,000 inhabitants is growing continuously. Even though the town is relatively small, the catchment area reaches over the entire region of Salten, which is very popular with nature tourists. Furthermore, more than 30 state authorities are located here – the public administration is an important economic pillar. Thus, not only the town hall or rather its two existing buildings were refurbished and rebuilt but also a striking new building of 6,500 m² followed in 2017 - 2019.

The heart of the new building is the atrium as a central meeting point and hub between the public area, the offices based in the upper floors as well as the passage leading to the existing buildings. Regular party traffic takes place on the ground floor. Individual meeting rooms that are accessible from two sides are available along the atrium. This allows employees to reach customer appointments directly from the offices. All the glass partitions and doors have been provided with stickers or curtains as privacy screens. Vertically, the atrium reaches up to the fifth and last floor and closes in large skylights. Transparent glass balustrades and fixed glazing allow light to brighten the open office areas in every single floor. Separate, glazed room-in-room systems are available for meetings. These also partially project into the office landscape.

The visual highlight in the atrium is the unusual wall design: an office landscape was rotated by 90 degrees and the furniture was fixed vertically along the wall cladding. The stairs on the ground floor that also serve as seat possibility for events, concert etc., offer a nice view of the unusual arrangement. The canteen on the top floor also offers a particularly beautiful view. You have a direct look at the harbour and the islands behind it through a floor-to-ceiling fixed glazing. The canteen area has also been fitted with acoustically effective wall and ceiling claddings in ash veneer, combined with glass elements that separate further meeting rooms. The same elements can be found in the refurbished existing buildings that are connected to the new building by a glazed staircase. The fire-protection-tested fixed glazing (EB 120, European Norm) was constructed from elements with individual dimensions of up to 3.10 m and a total height of 9.50 m. The access to the staircase is again the seat staircase in the atrium, a special construction with 20 mm thick parquet flooring of solid oak.

Lindner Group | International Projects, together with the installation teams of Lindner M+S and local partners, was involved in a wide range of services, including the unusually designed atrium with approx. 10,000 m² of acoustically effective wall and ceiling claddings made of ash veneer, the various versions of glass partitions and room-in-room systems. Lindner also carried out the parquet work and high-quality radiator cladding in the new Bodø town hall.