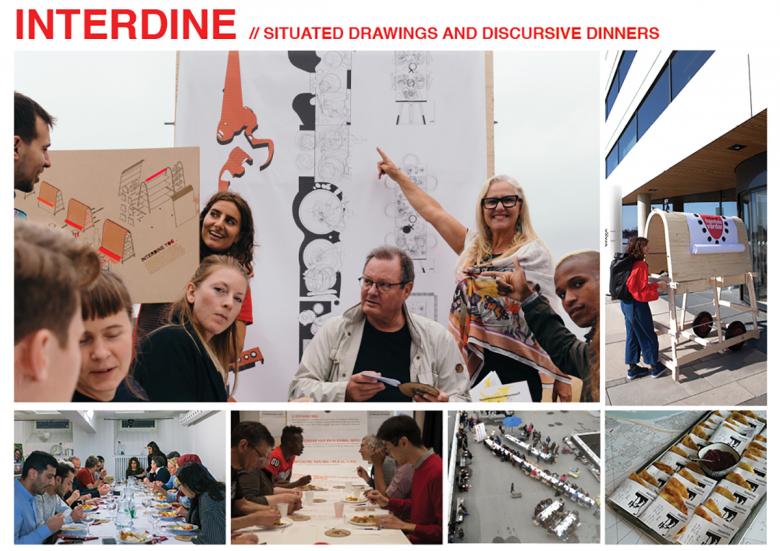 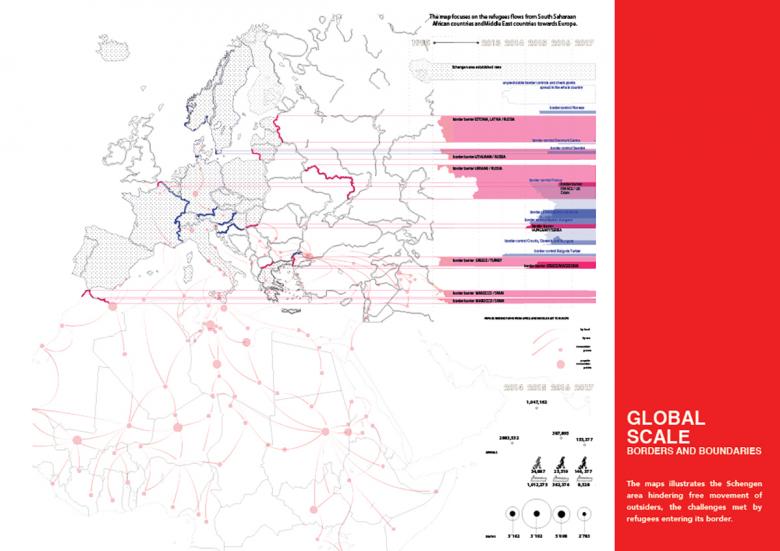 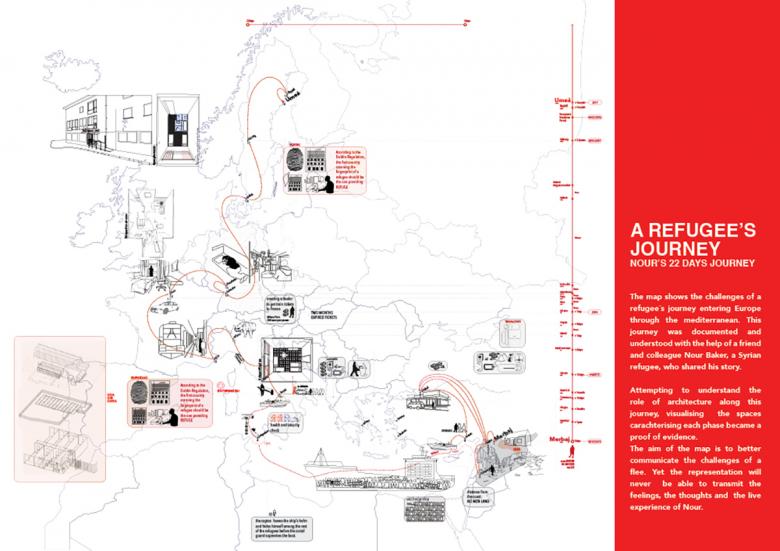 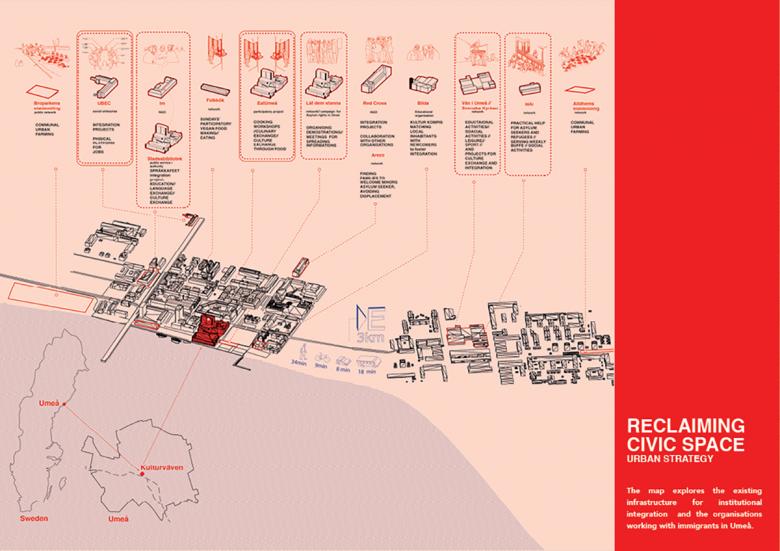 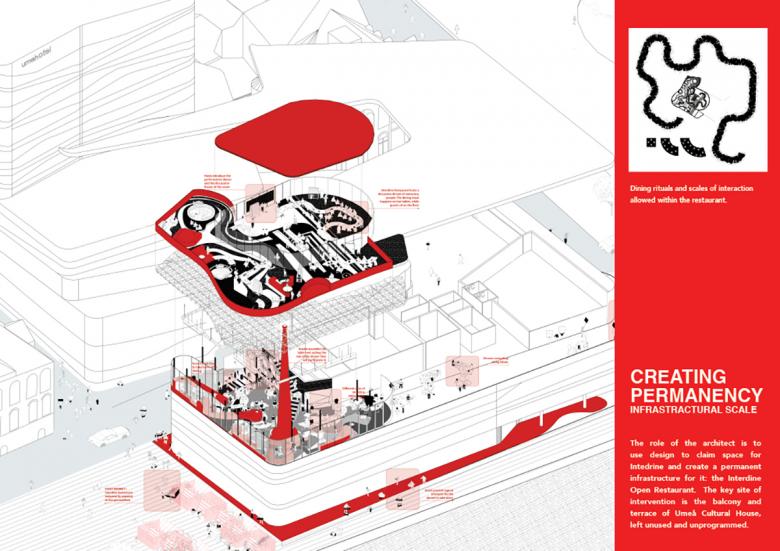 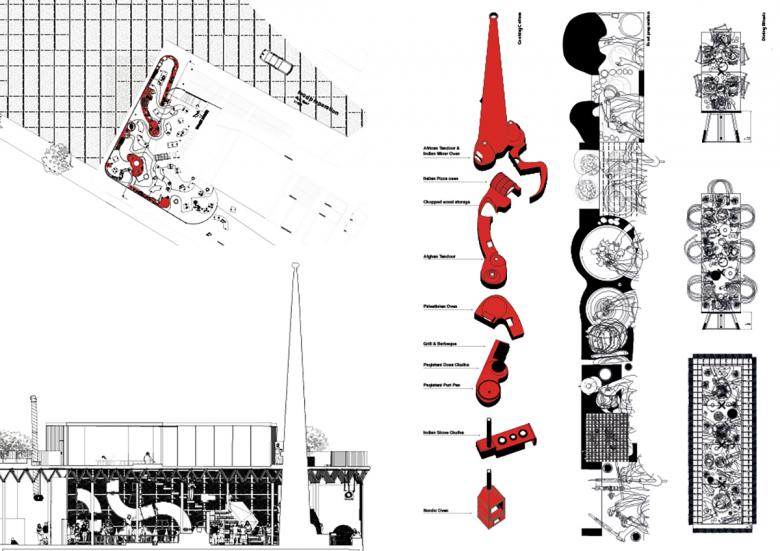 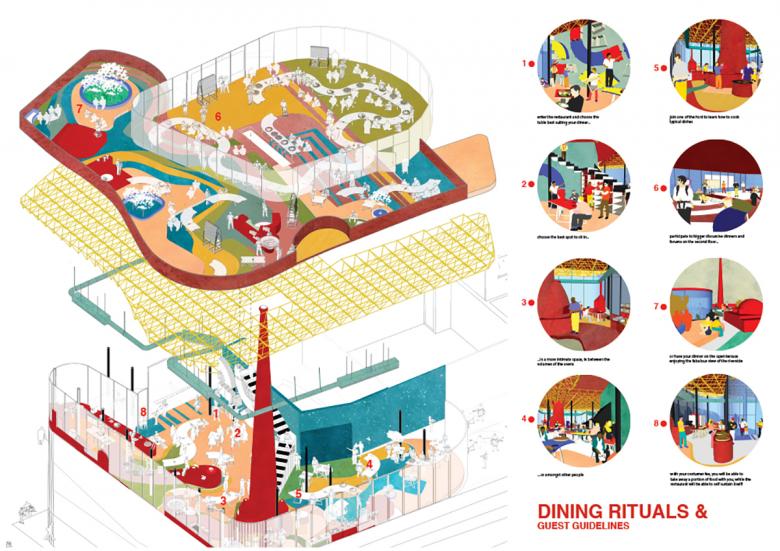 A social platform for integration through food and hosting

Interdine is an action-research project that responds to the current refugee crisis, intervening at a local scale. As a platform for integration through food, Interdine proposes different scales of action based on a continuous program. The proposal is used to claim space for Interdine and provide the city a centre for social engagement.

Although there are many facets to what is defined as ‘Refugee Crisis’, the focus of Interdine is integration. The analysis of the urban landscape of Umeå showed that there was a considerable distance between the organisations working with the 698 refugees and, their accommodations at the outskirts of the city. This directly affected the social and economic integration of refugees, resulting in isolation, unemployment, inability to speak swedish and a missing sense of belonging. Thus arose the need to use an interdisciplinary methodology to bring together the stakeholders from the community and bring this conversation to the public domain.

Interdine finds its roots in the intersection of two concepts ´interaction’ and ‘dining’ to create a meeting across borders around a dinner table. Interdine later came to include all the diverse actors involved in the issue, and eventually opened up to anyone who wished to participate, developing in a series of open discursive dinners occupying key spaces in the city centre. The table becomes a stage for conflict and resolution, creating new and richer knowledge productive both for the refugee, for Swedish citizens as well as for the government. The role of the architect is to enable boundaries to be crossed, letting the unfamiliar to become familiar. While designing the settings of the encounter, the architect becomes a host who aims to give agency to others. In order to create an intimate atmosphere, each event is celebrated in the presence of food. If food is at the basis of human survival, the way in which food is consumed and shared creates the basis for culture and rituals. The domestic and intimate dimension of dining rituals are used to enable understanding between strangers from across borders. Interdine merges the meal setting and artefacts with new surroundings, each time creating a new topography for its participants to experience. Starting in a home kitchen slowly it evolved into a scalable design strategy for the city. Kulturväven, Umeå’s cultural house, was chosen as a site to propose a permanent infrastructure and claim space for Interdine. This is done through an independently functioning restaurant attached to the existing building and run by refugees and locals together. This restaurant allows for discursive dinners that engage the community, cooking classes that enable better cultural exchange and employment opportunities that also help improve language skills. To achieve this, the space incorporates a combination of vernacular ovens (referencing the homelands of refugees) and a playful arrangement of modular and modifiable dining areas. Lastly a hosting toolkit was created to make Interdine self sustaining and allow the community to take it further.