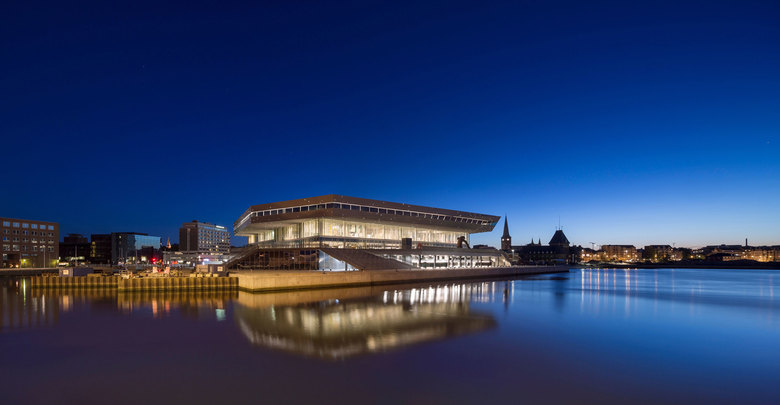 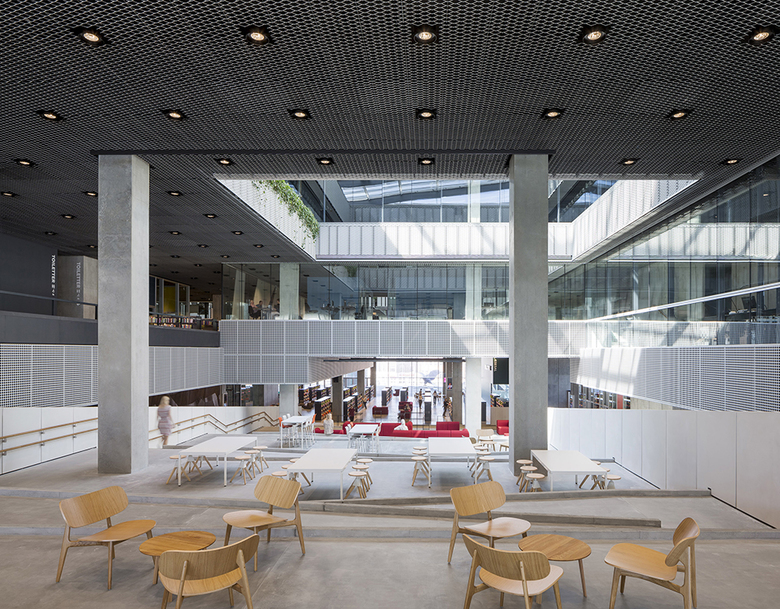 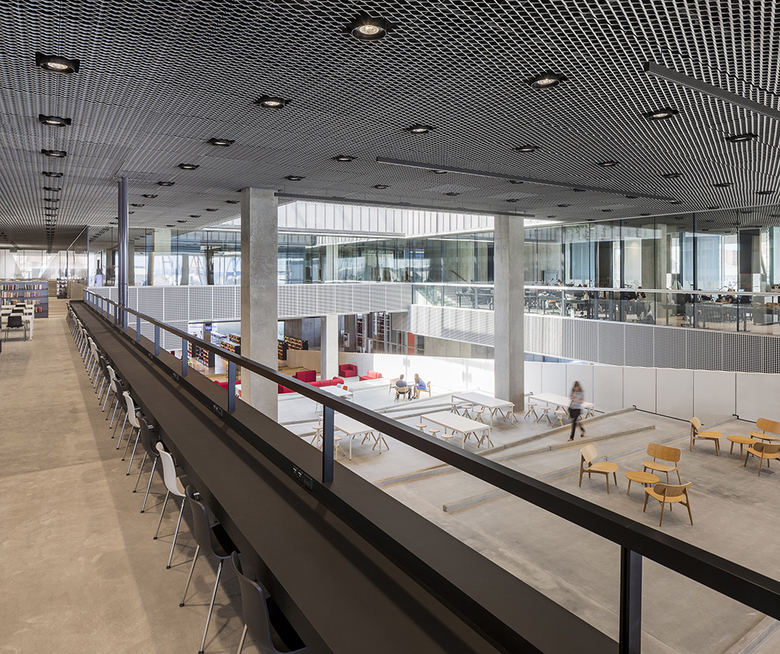 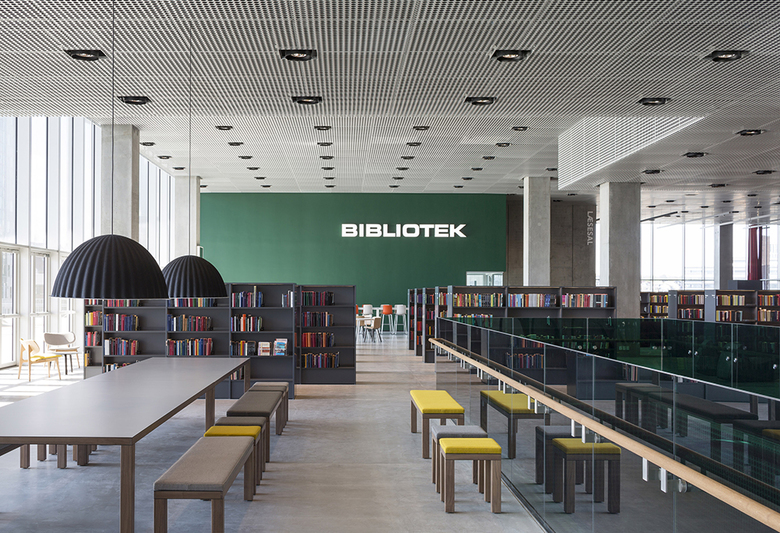 2009, first prize in an international competition

Sustainability
The building meets the requirements of the Danish 2015 energy classification and has 3,000 m2 of solar cells on its roof.

Dokk1 opened its doors to the public on Saturday, 20 June, becoming the largest public library in the Nordic countries, representing a new generation of modern, hybrid libraries. The 30,000 square metre building is part of the Urban Mediaspace project, which is transforming the harbour front of Aarhus. The project houses the new library, a citizen service centre, automatic parking for 1,000 cars and new harbour-side public squares. With a budget of over € 280 million, it is the largest construction project by the Municipality of Aarhus in the city’s history.

In 2009, schmidt hammer lassen architects won the competition to design the new Urban Mediaspace project as lead architect in collaboration with Kristine Jensens Landscaping and engineering company Alectia. The large polygonal building is located at the mouth of the Aarhus River, connecting the city with the port and water. Flanked by forests to the north and south, a recreational belt has been created through which a new light railway will run with a dedicated station at Dokk1. Road traffic will be redirected, so that it has direct access to the large under-ground car park beneath the building. New cycle paths run through the scheme that includes over 450 bicycle parking spaces. Dokk1 will become a new hub and metaphorically the "hinge" that opens up to new experiences in Aarhus city.

A covered urban space/The principal idea behind Dokk1 is a transparent covered urban space. Kim Holst Jensen, Senior Partner at schmidt hammer lassen architects, explains: “Dokk1 is not simply a building. It is a place for exchanging knowledge and opportunities and a multicultural meeting point that will change people’s perception of the entire city. Dokk1 enhances this special setting with an architecture that creates an exceptional visual connection to the city – both from inside the building and out. Through this, we form an icon for the knowledge society, an icon that supports and stimulates creative collaboration."

Dokk1 is designed as a polygonal slice that hovers above a glazed building resting on a podium with large sculptural stairs. The stairs fan out to street level and the new harbour promenade surrounding the building. The glass building is designed as an open urban space with 360-degree views of the water, harbour, forest and city. The building has no clear front or back, which is emphasised by the multi-edged top slice that creates the impression of rotation and movement. The facade is made of expanded metal, the scale of the city and harbour is reflected in the design, which twists, breaks and turns. The concept of the façade design is an interaction with the height of the surrounding buildings and the scale of the port with reference to large elements, such as cranes and ships.

Democratic, open and diverse/The polygonal top floor contains the municipal administration offices along with rental offices. The two open levels of the library are connected by the media ramp, which consists of five platforms, each dedicated to an activity: exhibitions, gaming, interactive workshops, reading and events. Combined with the literature and media sections, the media ramp offers a meandering path of activity through the building leading up to the children’s area on the top floor.

"Inside, the open layout creates visual connections between the various functions, and invites the visitor to be inspired by the vast amount of information that inevitably meets them. Openness encourages social interaction and the exchange of information. Dokk1 will become a vibrant space for people of all generations, interests and cultures. Our concept, with interweaving activities and functions, supports this synergy," concludes Kim Holst Jensen, Senior Partner at schmidt hammer lassen architects.

The development of Dokk1 has in many ways influenced how schmidt hammer lassen designs libraries around the world. One example is in the handling of the public consultation, from which we have learnt large amounts. For Dokk1, this process directly influenced the size of the multi-hall and the design of information in the reception area.

schmidt hammer lassen architects has extensive experience of designing libraries. The most renowned of these being the extension to the Royal Library in Copenhagen, Den-mark, and the RIBA award-winning University of Aberdeen New Library in Scotland. Last year, two Canadian libraries opened in Halifax and Edmonton and in 2018 a new central library in Christchurch, New Zealand, will open. Earlier this year, Dokk1 was awarded a commendation in the category "Cultural Regeneration" at the 2015 MIPIM Architectural Review Future Projects Awards.