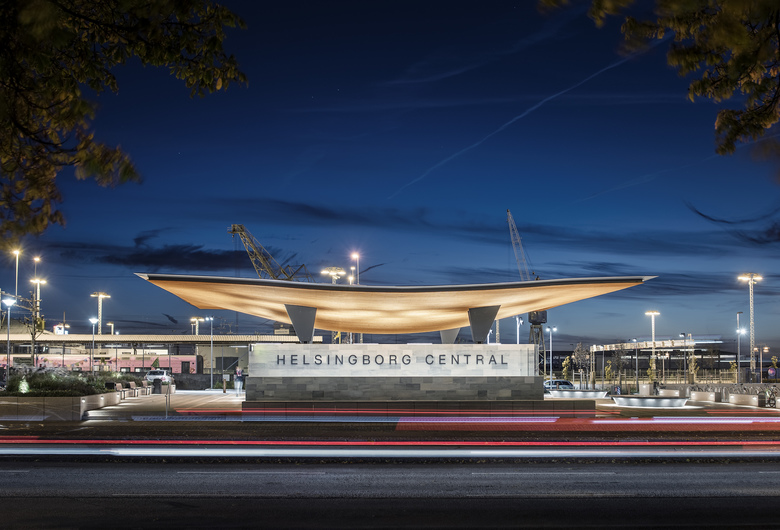 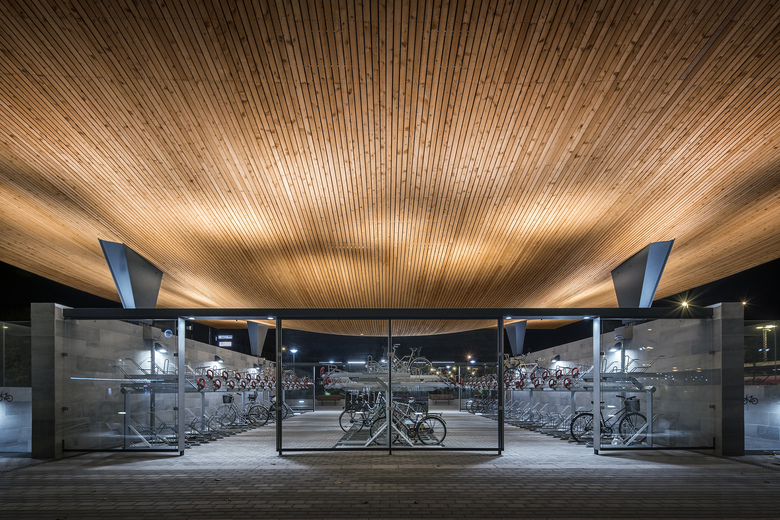 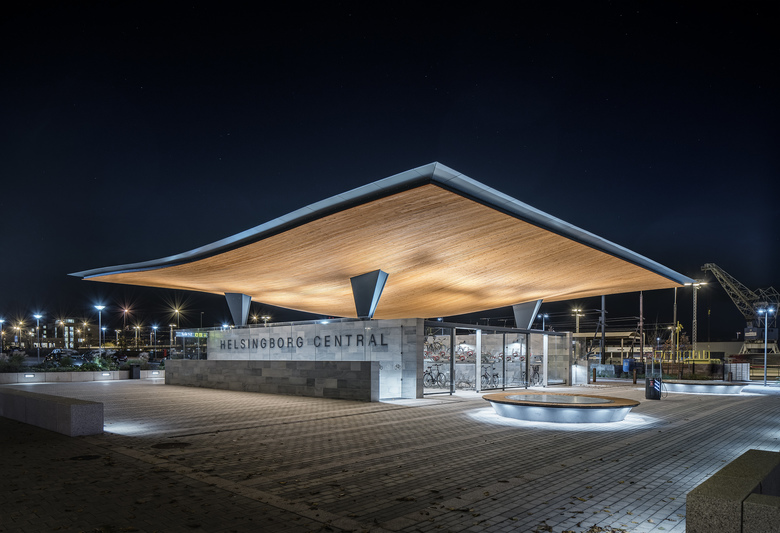 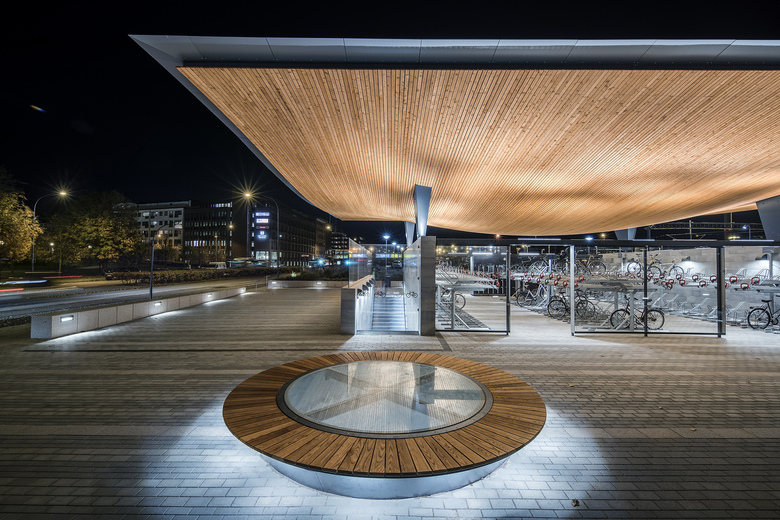 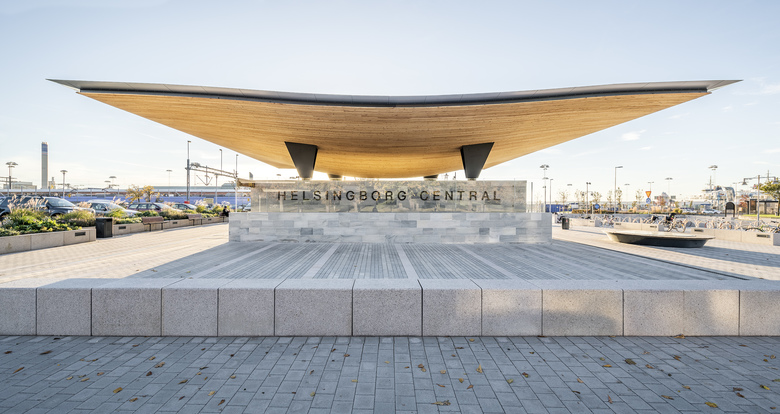 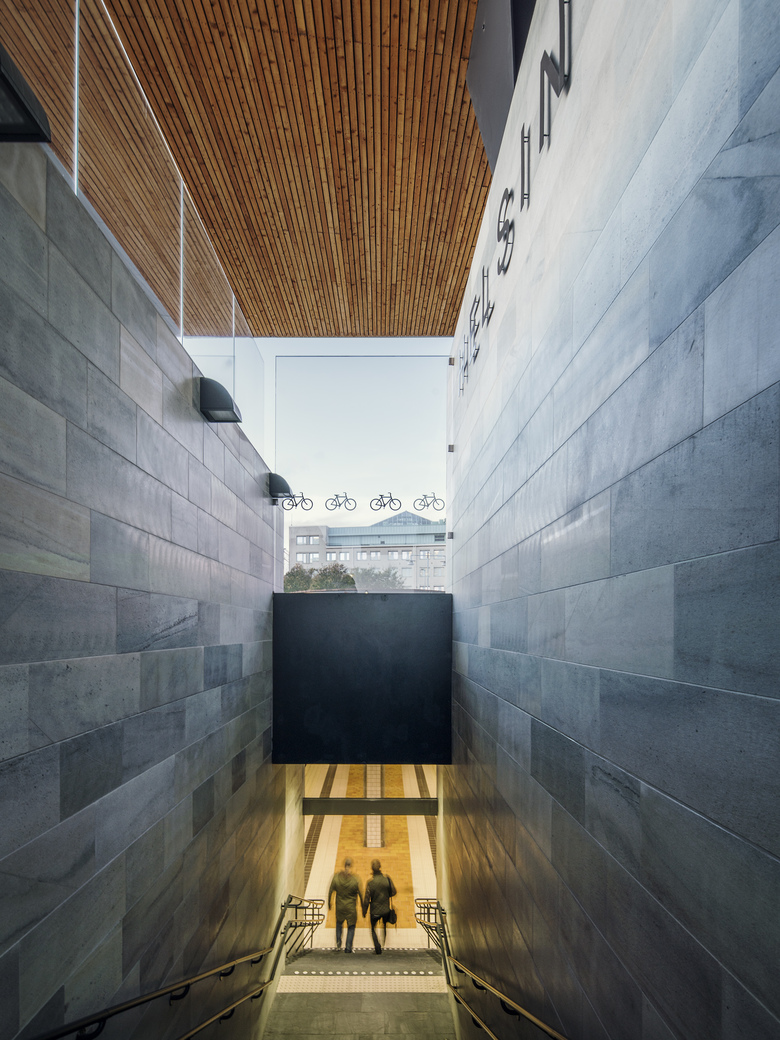 Small-Scale Grandeur
Helsingborg Central Station, Knutpunkten, has gotten a new southern entrance. But Södra entrén – “The South Entrance” in Swedish – is far more than just a shortcut to the tracks.
As well as a new passenger flow and a bicycle hub, the new entrance is also a landmark and a destination that strengthens the city’s commercial ties. The Municipality of Helsingborg has witnessed a sharp increase in traffic to and from the city. Looking forward to 2020, it is estimated that daily visitors will increase from the current figure of 22,000 to 32,000. This is a pressure that Knutpunkten – which was designed by Ivar Krepp in 1984–1991 – could not handle in its current state, which is why the decision was made to create a new exit and approach at the root of the track’s southern extension. Furthermore, the southern entrances were in a worse condition than the northern ones, which affected the flow of pedestrian traffic. Knutpunkten is currently undergoing a transformation and renovation, yet another task that fell on us.
A competition that was won
In 2013, the Municipality of Helsingborg arranged a competition for architects relating to the new entrance, a pre-qualification with tenders. Tengbom Helsingborg won the tender in collaboration with Tyréns, an urban planning consultancy company. We were general consultants during the entire project phase, with all other consultants working under us.
The back became the front
In other words, the new entrance transformed an anonymous backside of the station into another front entrance. This has also contributed to increased traffic safety, as pedestrians walking to the campus area previously had to cross the bus terminal, which has been avoided with the new flow of traffic. A new pedestrian crossing over Järnvägsgatan, which leads onto Bollebrogatan, also adds to a more direct link to the local Stadsparken park and the south district of the city. A further aim is to promote cycling in the city. A total of 450 bicycle spaces have been created between the entrance steps and freely on an open platform. There are also other facilities such as a pump, a repair station and lockers.
A prominent landmark
In addition to solving many of the problems the city was experiencing, the entrance has become the landmark that we proposed and were hoping for. The sculptural timber roof is on two slate-clad wall plates that seem to grow up from the track area. Simple glass panels have been used as extra protection against the elements. Even the lighting design has been influential to the project, where the primary light source for the roof of the bike rack is indirect and hidden. Two existing emergency stairways were torn down and the shafts transformed into circular drop of daylight onto the platforms, with benches at ground level.

A metaphor for travelling
Just like the act of travelling, the new entrance is very much about transitions, both physically and architecturally, as well as metaphorically. Physically, it’s about understanding the flow of traffic and people. Architecturally, we are talking about open encounters – heavy meets light and geometry meeting organic forms. Metaphorically, you might say that the South entrance is a symbol for the transition to a new travel area, ready for the future.