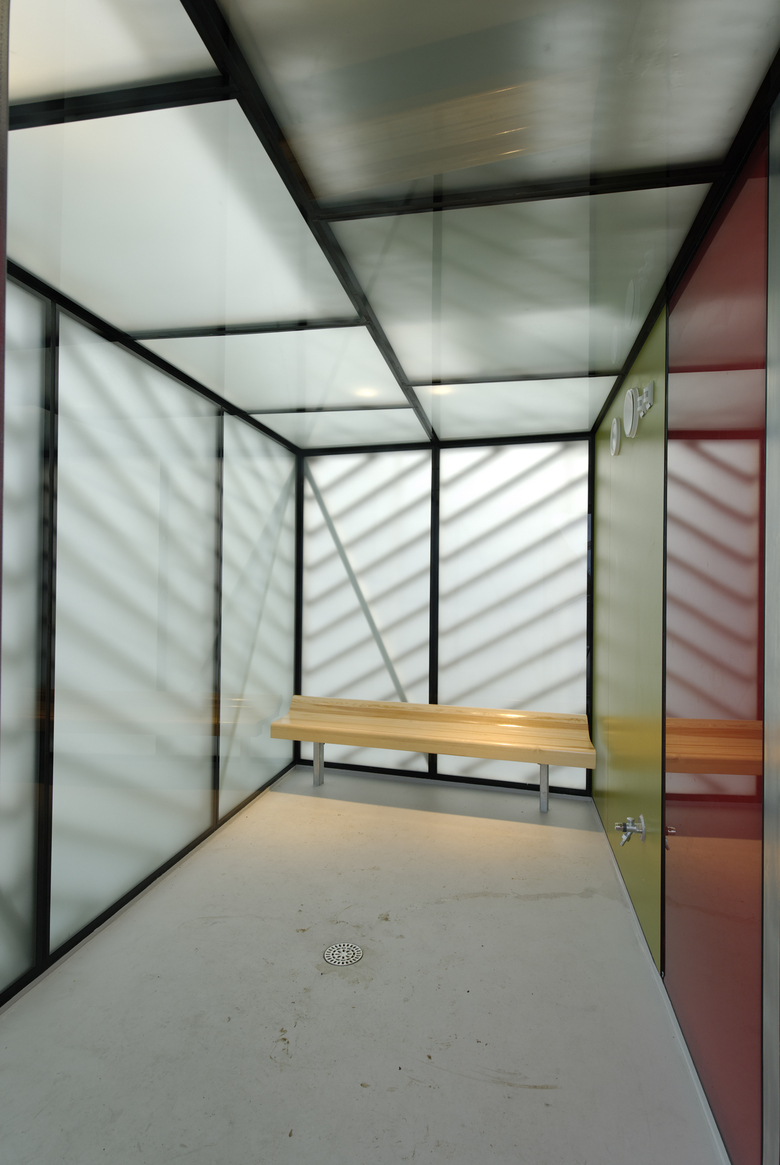 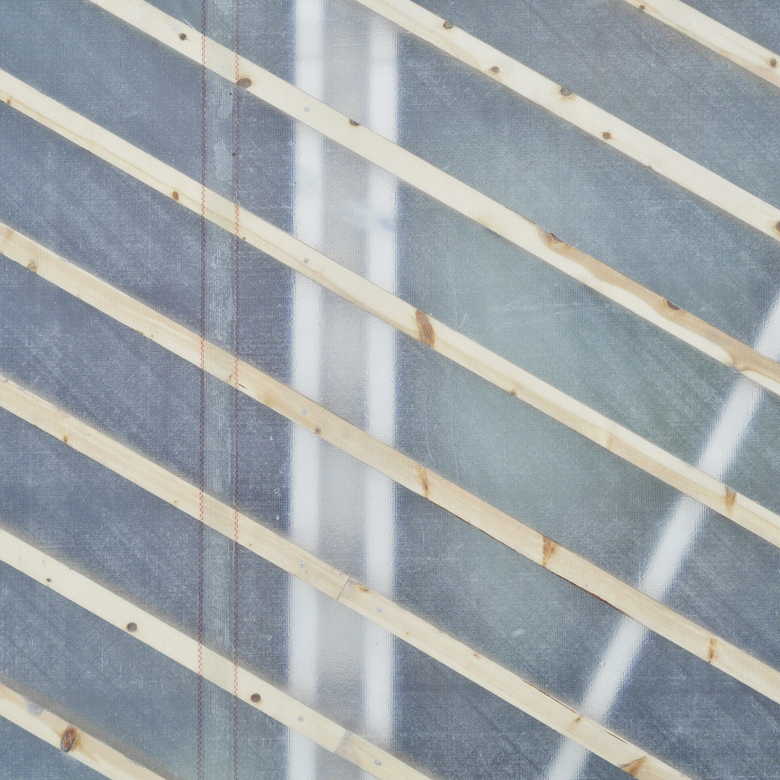 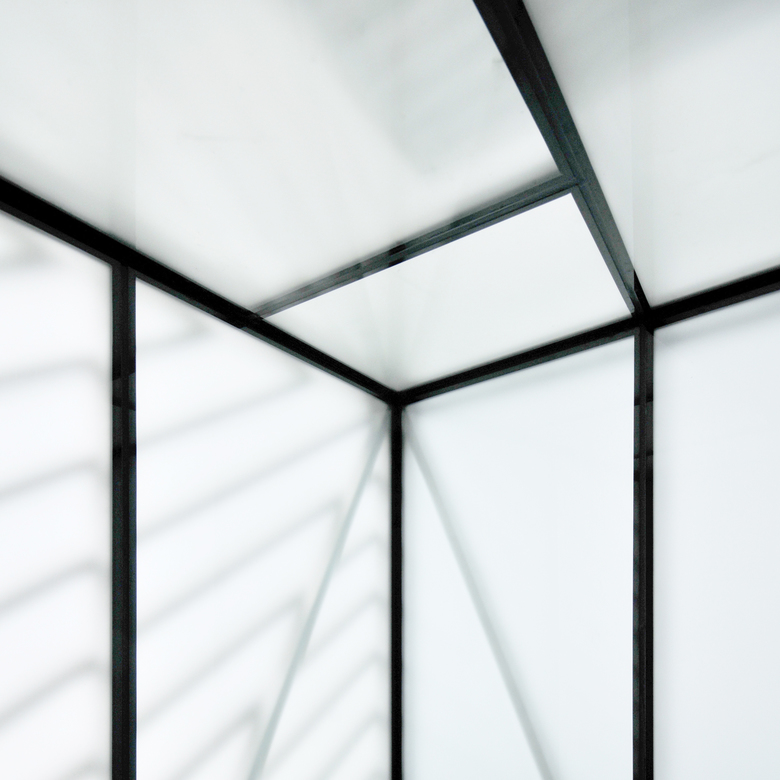 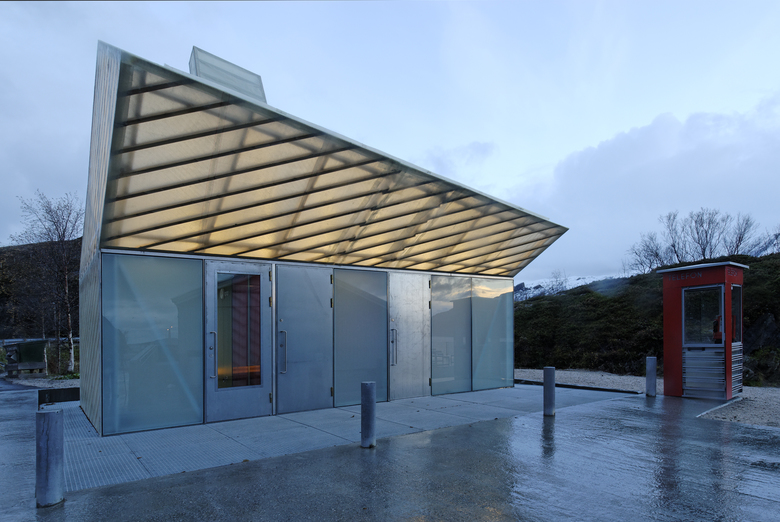 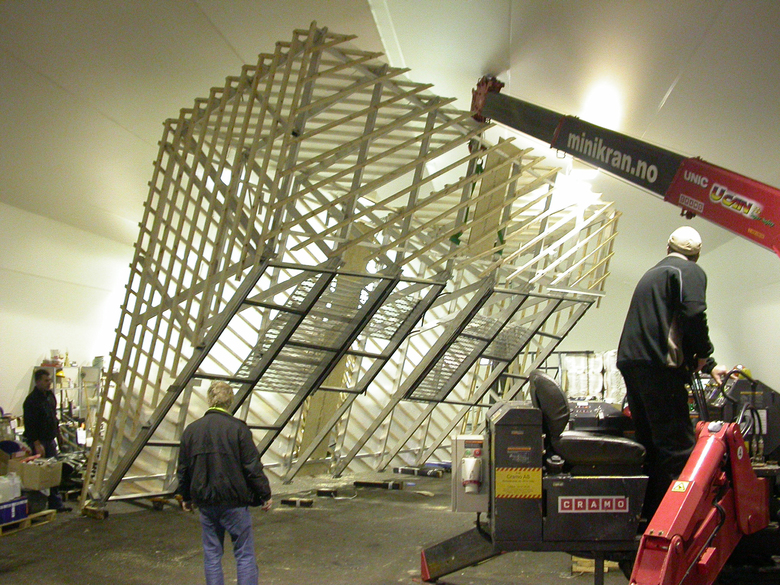 Despite the informal program the small service building on Jektvik ferry terminal the project is very much an experiment. Besides of meeting some very pragmatic functions - a waiting room and two rest rooms – the projects is first and foremost about transparency and construction  and the architectural consequences of these. Vehicle for this study is built up as follows: A load-bearing, prefabricated, modular aluminium structure has a twisted facade glazing. Ie. that a SG-facade system ("structural glazing") is assembled with the outside inwards. Both walls and ceiling have this structure and the rooms appear inside with very plane glass sufaces. The glass units, which are composed of various combinations of frosted and coloured glass gives varying transparency and translucency to the side rooms and the surroundings.

On the outside of the supporting aluminium structure is mounted a lath work of 48x48 pine c/c approx 250mm. The lath work makes the basis for a seamless outer skin of reinforced polyester. The fibreglass skin is not cast against a smooth shape (as in for example a boat), but hung up on the timberwork as a wet cloth before it hardens. The fibreglass works was, like the main structure, made inside a closed production hall in Hamar, before the house was taken in six parts by car to Helgeland in the north of Norway. The main subcontractors for the house have been a glass contractor and a boat building company. All technical installations and lighting are positioned, half visible, in the zone between the glass and fibreglass. Over the flat glass ceiling is this zone functioning as a cold attic, which comprises ventilation aggregate, technical guidance and lighting. A working title for the project was "the shrimp" because the house's structure and internal organs were partially visible through the transparent layers of glass and fibreglass.

The special construction method has provided a house with many demanding details. The building is universally accessible with wheelchair entrances at the level with the surrounding area. A steel grid floor is surrounding the entire building, so that the transparent walls can be traced all the way down to the ground. The space beneath the grid is also the inlet chamber for ventilation of both the rooms themselves and the double wall structure. The general lighting consists of linear LED lighting fixtures that are mounted on the ceiling trusses. There are also mounted down lights that provide concentrated light to the rooms below. It is used colours and visual contrasts adapted for the visually impaired.

The situation and the building volume are applied to give the project a more architecturally relaxed appearance. The "wind queer" form gives a secluded outdoor space behind the existing kiosk building. This outdoor area is defined also by a refurbished phone box placed by the Norwegian Telecommunications Museum. Kiosk building has been given a general renovation. An extension of the kiosk building to the south are being planned to make room for a snack bar and an enhanced information service.