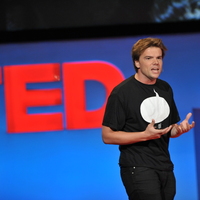 Bjarke Ingels started BIG Bjarke Ingels Group in 2005 after co-founding PLOT Architects in 2001 and working at OMA in Rotterdam. Through a series of award-winning design projects and buildings, Bjarke has developed a reputation for designing buildings that are as programmatically and technically innovative as they are cost and resource conscious. Bjarke has received numerous awards and honors, including Wall Street Journal's Innovator of the Year Award, the Danish Crown Prince’s Culture Prize in 2011, the Golden Lion at the Venice Biennale in 2004, and the ULI Award for Excellence in 2009. In 2016, TIME Magazine named Bjarke one of the 100 Most Influential People in the World.

Alongside his architectural practice, Bjarke taught at Harvard University, Yale University, Columbia University, and Rice University and is an honorary professor at the Royal Academy of Arts, School of Architecture in Copenhagen. He is a frequent public speaker and has spoken in venues such as TED, WIRED, AMCHAM, 10 Downing Street, and the World Economic Forum.

Sheela Maini Søgaard’s primary responsibility is the general management of BIG, with special focus on finances. Since she joined BIG in August 2008 her focus has been on optimizing cashflow, formalizing contract policy and worked with the organizational structure, the latter of which has most notably resulted in a re-alignment in the Business Development area at BIG. Sheela’s professional experience covers, among other things, process optimization, cost control and business development, skills which she has accumulated from her time as Business Development Manager at Meyers ApS, a long commitment with GN ReSound, where she had several managing roles, latest as International Product Manager, as well as her time as Strategy consultant at McKinsey.

Finn Nørkjær is a Partner at BIG and has collaborated with Bjarke Ingels since he won the competition on his very first project for the Aquatic Centre in 2001. Finn was instrumental in translating Bjarke’s visionary architecture into projects which could be built by bringing his extensive experience to the table. In addition to the Aquatic Centre, Finn has worked extensively on most of BIG’s built projects, eg. the VM Houses and The Mountain which was completed in 2008. Only with his thorough attention to detail and ability to work within the given budget was this breakthrough project able to see the light of day. Finn’s latest projects include the 8 House and the Danish Pavilion for the 2010 Shanghai Expo, which have been completed in Copenhagen, Denmark and Shanghai, China respectively.  Currently Finn is working on a 20.000m2 Education Centre in MagnakIl on Faroe Islands. 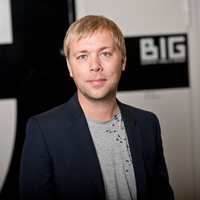 Thomas Christoffersen began his collaboration with Bjarke Ingels in 2001 when PLOT was first formed. Thomas has worked on every notable project from the VM Houses to one of our most global developments, Astana National Library. He is currently overseeing the detail design and construction of the 75.000m2 mixed-used West 57 building in Manhattan. Other accomplishments include the design for Iceland’s National Bank and Stavanger Concert house in Norway. In addition to his long standing participation in all things BIG, Thomas took a sabbatical year to work in New York City with WORK Architects and has also worked with Stan Allen, David Ling in NYC and Henning Larsen Architects. 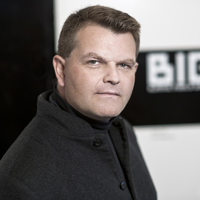 Kai-Uwe Bergmann is a Partner at BIG who brings his expertise to proposals around the globe, including work in North America, Europe, Asia and the Middle East. Kai-Uwe heads up BIG’s business development which currently has the office working in over 20 different countries as well as overseeing BIG’s Communications. Registered as an architect in the USA (eight states) and Canada (one province), Kai-Uwe most recently contributed to the resiliency plan The Dryline to protect 10 miles of Manhattan’s coastline. He compliments his professional work through previous teaching assignments at the University of Florida, the New School of Architecture in San Diego and his alma mater the University of Virginia. Kai-Uwe also sits on the Board of the Van Alen Institute, participates on numerous international juries and lectures globally on the works of BIG. 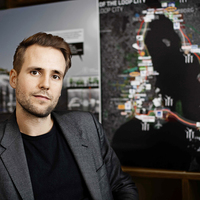 Andreas Klok Pedersen is Partner and Design Director of BIG Copenhagen. He is Partner-in-Charge of a number of BIG’s competitions, master plans and large-scale projects in Europe and Asia. Most recently, Andreas has led the prize-winning competitions for the PARC research center in Paris, Basel Transitlager, Greenland National Gallery of Art and the Shenzhen Energy Mansion as well as the ongoing regional planning project the Loop City. His projects also count the Urban Future Award research project for Audi, the carbon neutral Zira Island in Azerbaijan, Tamayo Museum, Ren People’s Building, Lego Towers, Kløvermark, Scala Library, Arlanda Hotel and BIG’s contribution to the Venice Biennale in 2004 and 2010. In addition to managing competitions and concept development at BIG, Andreas runs an Architecture studio at the Royal Danish Academy of Fine Arts in Copenhagen and lectures internationally on BIG’s current research and projects. Andreas was Guest-Professor at the AHO School of Architecture in Oslo Norway in the fall 2011.

David Zahle is a Partner at BIG and the Project and Design Architect responsible for many of BIG´s award winning projects. His collaboration with Bjarke Ingels began in 2002 with the VM Residences in Copenhagen. During the same year David won the Helsingør Psychiatric Hospital and subsequently followed it through to completion in 2006. He also led the design of the Stavanger Concert House, which was awarded the Golden Lion at the Venice Biennale 2004 for the world’s best concert house, the Magnakil Education Centre in the Faroe Islands and the Danish Maritime Museum from its concept stage in 2007 to completion in 2012. Recently David has overseen the design of many prominent projects including a new art gallery and sculpture park in Norway, the Quingdao Science Museum, the Experimentarium competition in Copenhagen and the prize winning Amagerforbrænding; Copenhagen’s new Waste-to-Energy Plant with an innovative roof doubling as a ski slope. In addition to his design success, David has lectured on BIG’s works throughout Europe and taught throughout Scandinavia. 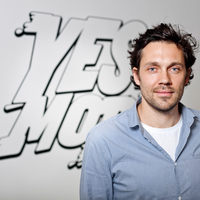 Jakob Lange is a Partner at BIG and has collaborated with Bjarke Ingels since 2003. As the lead for several prize winning projects, Jakob has been instrumental in winning some of BIG’s largest commissions. He led the design and development of the Mountain residences in Copenhagen (2008) and served as the Project Leader for the new Tallinn Town Hall in Estonia, which received a MIPIM Future Award in 2011. He is currently Partner in Charge of Stettin 7, a 20,000 m2 high-end green residential building in Stockholm, Sweden. Jakob also heads BIG IDEAS, BIG’s technology-driven special projects division. Through analysis and simulation, BIG IDEAS informs BIG’s design decisions with precise data rather than style or aesthetics – information driven design. Special projects, including a green window farm, customized lamps and building systems support the studio’s work from small details to the BIG picture. 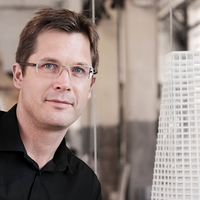 Jakob Sand joined BIG in 2011 to lead the team for the prize-winning Paris PARC project for the Jussieu Campus of the Univerité Pierre et Marie Curie. During his career Jakob has worked in the field between conception and realization; as Project Leader on several prominent developments, he has won many competitions in Denmark and abroad. Working in both Paris and Copenhagen for many years has given him an excellent knowledge of European culture and building practice. For 5 years he worked closely with Dominique Perrault where he participated on prize-winning projects including the Palais des Sports de Rouen, which he led through all phases to construction, as well as the French Pavilion for the Venice Biennale 2010 for which Jakob was Project Leader. Together with Perrault, he also developed several large-scale competitions including the Headquarters for EDF- Paris, Tours de Pont des Sevres - Paris, University ARTEM -Nancy, Seoul Opera House - South Korea and the University in Belval- Luxembourg. 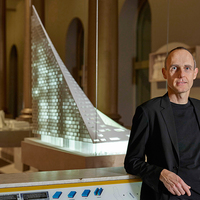 Beat Schenk joined BIG in 2010 as Senior Project Manager, and is now the Director of Detail Design. Prior to his current role, he worked on a variety of healthcare, educational, and cultural projects around the globe. Beat has more than 20 years of experience as Project Architect and Designer and has sharpened his skills while working on many notable buildings in North America, Europe, and the Middle East. While at Frank O. Gehry Partners, he worked on a number of museum projects – including the Guggenheim Museums in Bilbao, Spain and Lower Manhattan, NYC – besides working on the Vitra Chair Museum Expansion in Weil, Germany. Beat’s collaboration with BIG dates back to 2000, where he worked alongside Bjarke on the Seattle Public Library in Seattle, Washington while at the Office for Metropolitan Architecture (OMA).

Daniel joined BIG in 2008 and has worked on many of BIG’s most prominent projects and winning competitions, including Tallinn Town Hall, Slussen Masterplan in Stockholm, Astana Library in Kazakhstan, Qingdao Bridge in China and the international competition for a new entrance pavilion at the Musée National des Beaux-Arts du Québec. Daniel was one of the lead designers of the prize-winning Maison Des Fondateurs Audemars Piguet (Audemars Piguet Museum) in Le Brassus, Switzerland and the PARC Jussieu Campus in Paris. Recently, he worked as Project Leader for West 57th, a mixed-use residential building in New York City. With a background as a photographer and graphic designer, Daniel is a strong communicator, leading visualization and graphical representation at BIG. Daniel moved to New York City in 2010. 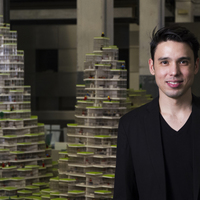 Brian Yang joined BIG in 2007 and has worked closely with Bjarke Ingels on a wide range of projects from the 8 House, a residential building in Copenhagen, to the conceptual design of a mobile gallery for the Tate Modern in London. He has been the Project Leader on a number of competition winning proposals, including a new Waste-to-Energy plant in Copenhagen that doubles as a ski slope, a contemporary art museum in Norway that bridges across a river, and a sustainable multifamily residential development in Finland. Most recently he has been the design leader for The LEGO House, a new LEGO experience center in Denmark opening in the second half of 2017. With a background in energy efficiency research as well as undergraduate studies in economics, Brian brings additional focus on environmental and economic sustainability into all of his projects. Prior to joining BIG, Brian worked at a number of practices internationally, and while at Harvard University’s Graduate School of Design, led a project team for a pavilion exhibited at the 2009 Gwangju Design Biennale in South Korea.